You are here: Home1 / Retinoblastoma Resource2 / Through Our Eyes3 / Unilateral Rb4 / Rosine (Ghana)

I first began to think something was wrong with Rosine’s left eye one Sunday when she was 8 weeks old. I was holding her in my arms during the morning church service, and for just a moment I saw a pearly glow in her eye. I asked my husband’s mother to look, but she did not see anything.

No one else could see anything wrong with Rosine’s eye.  It was such a transient thing, and she apparently had no vision problems.  I concluded there was no need to be concerned. 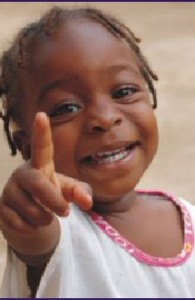 Rosine continued to grow normally, but every now and then over the next two months, I saw the light again for just a second or two.  Each time it seemed to be brighter than before, but perhaps my intently looking at her eye was causing my own eyes to play tricks on me.  Rosine seemed fine, but when she was four months old, I decided, for my own peace of mind, to ask a doctor at the health clinic for advice.

The doctor was kind and efficient and gave me confidence that if something were wrong, he would find it and tell me.  He looked in Rosine’s eyes, but did not see anything of great concern.  He thought she may have a mild infection and prescribed some antibiotic drops.

I put the drops in Rosine’s eye four times a day for two weeks.  She hated them and cried terribly each time I put them in, and I felt so guilty about hurting my baby in this way.  I don’t know what I expected to see, but I was hoping to not see the white glow again after we ended the drops.  Yet there it was, and now it seemed to be a more constant light, but only when we were inside the house.

Two weeks after we ended the drops, I was cooking outside in the early evening with my mother.  I looked over to where Rosine was laying on a blanket, and my stomach turned.  Her whole eye seemed to be glowing white, like a devil’s eye.  For the first time, someone else in my family saw what everyone though I imagined.  My mother was horrified, and we agreed to go back to the clinic the following day.

By chance, we attended the clinic during the visit of a British GP volunteer.  He was curious about the white reflection I described, and examined Rosine’s eyes thoroughly.  The examination was the same as the first one, but the doctor took us into a hall and turned off the ceiling light.  There were no coverings on the window in the exam room, and he explained that an eye examination is best done in a darkened room.

The English doctor advised I take Rosine to an ophthalmologist urgently.  He said he didn’t want to scare me, but he was concerned she may have eye cancer, and she must see a specialist immediately.  I was very alarmed for my daughter.  We did not have money to pay for expensive treatment in the city, and I did not know anyone who had survived cancer.

The doctor said it was possible he could be wrong, but if he was right, early treatment would be the only way to save Rosine’s life.  He was very firm and said that if we delayed going to the hospital, she would probably die In a lot of pain.  I asked him what the treatment was, but he only said I must discuss this with the experts.

When I explained all of this to my husband, he was sceptical.  The hospital we were recommended to attend was five hours from our home, and our funds were small.  I suggested we go together to the clinic so he could talk directly with the English doctor, and he agreed.  We had another long conversation with the doctor, who insisted we must make the journey to the capital city in the next few days.

My husband was still unsure.  How much would this cost?  Rosine seemed fine to everyone, even me.  She was not sick or in pain.  Her vision seemed fine.  The doctor did a small experiment to test Rosine’s vision.  He covered her left eye and moved his hand from left to right.  We watched as her eye followed his hand, but when he covered her right eye, she began to cry, and her eye did not react at all.

The doctor thought Rosine’s left eye was blind.  I had a hard time understanding how my daughter could be blind in one eye without any of us noticing.  The doctor explained that babies don’t know anything different and simply adjust, and because the sight in her right eye was probably fine, and she wasn’t yet very mobile, it didn’t make much difference to her.  The vision loss would be more noticeable in an older, more active child.

So we packed our bags and took an overnight bus to Accra.  At the hospital, our five month old daughter was diagnosed with unilateral retinoblastoma.  We were shocked and devastated, even more when we learned about the treatment she required.

The doctor told us Rosine’s eye must be removed to save her life.  I am so thankful to the English doctor for not answering my question about treatment.  Perhaps he didn’t know, or maybe he knew that if he told me her eye should be removed, we would not have gone to the hospital, in fear for that being done to our precious child.

We begged for an alternative, and my husband was certain we must go to a private hospital for a second opinion, but we had no money to do that.  I remembered the words of the English doctor, that without treatment, she would die in terrible pain.  I wanted to save her eye too, but I was not willing to risk the possibility of her dying.  We were in an impossible situation.

We thought, if only we had money, this wouldn’t be happening to us, but ironically, it was our lack of money that saved Rosine’s life.  I later met other families with good money who delayed surgery for months while looking for a miracle and paying the ultimate price.

So the decision was made to remove Rosine’s eye.

We saved and raised money to buy an artificial eye made for Rosine.  Almost two years after her surgery, we traveled to South Africa to receive it.  While there, my husband and I were offered scholarships to study at a technical college in Johannesburg, an opportunity that would not have come to us if Rosine had not led our lives along this path.

Today, Rosine is in school and thriving.  I don’t know how she could have survived without the knowledge of the English doctor.  He came to us like an angel and I’m ashamed to say we do not remember his name, but he is a hero in our lives.  Children usually die from this cancer here in Africa.  We were ignorant and could so easily have lost our little girl.  The education he blessed us with is like breathing the air – life is not possible without it.