You are here: Home / Our Vision and Mission / Our History

Led By the Children

Our story begins with Daisy, a wonderful young lady from England who battled eye cancer for five years. Daisy required specialist care at Toronto’s Hospital for Sick Children (SickKids) that was unavailable to her in the UK.  Her parents established The Daisy Fund to raise funds for her intensive treatment and the sixteen month stay in Canada. 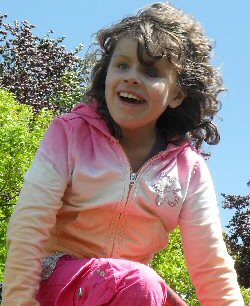 On September 29, 2004, Abby White, a retinoblastoma survivor and friend of Daisy’s family, received an email from a mother in Africa whose two-year-old daughter had eye cancer.  By coincidence, September 29th is also the Feast of St Michael, Patron Saint of Sick Children, often celebrated with wreathes of Michaelmas Daisies.

We established Daisy’s Eye Cancer Fund in England and at SickKids Foundation, to raise funds for Rati’s care.  The UK fund achieved official charity registration in September 2005.   We rebranded in 2015 to become World Eye Cancer Hope.

Beyond One Child, Sharing Hope For All

Within three years, our mission evolved rapidly, as we aspire to preserve life and sight for all children with eye cancer around the world.  We pursue this ultimate goal by building sustainable local capacity to deliver the best possible medical and supportive care.

Our strength lies in our unique worldwide collaboration of health care professionals, parents and survivors, scientists and others concerned about retinoblastoma.  All our activities are motivated by a desire to promote the complete wellbeing of each child, adult survivor and their family.

Rati set us a challenge to help children like her, who are dying in terrible pain from this entirely curable cancer.  In September 2006, we launched “Rati’s Challenge” as our first initiative addressing the needs of families affected by retinoblastoma in Africa. This led to the founding of our Kenya