In dim light, the pupil expands to allow more light through for clearer vision.  When you take a photo with a flash, pupils do not have time to contract. So the camera picks up a reflection from the central part of the retina called the fundus. This is simply pigment epithelium and vascular layers supporting the retina. 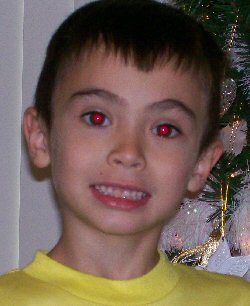 Red reflex is more pronounced in light coloured eyes, and children with very dark eyes may have no recognizable red reflex.  The reflex varies in colour in non-white babies, appearing yellow in Asian eyes, and green-blue in African eyes.

The following slide was presented at One Rb World 2021 by Dr. Andrew Blaikie from the University of St Andrews, Scotland.  He demonstrated how the term “red reflex” is clearly inaccurate for most people in the world. You can also see this demonstrated in Dr. Blakie’s video of an ArcLight Scope Fundal Reflex Exam, included in our guide: What should I expect at the eye exam?

The term Fundal Reflex more accurately describes reflection of light from the back of the eye.  For this reason, we advocate its use to inclusively describe this phenomenon in all children. 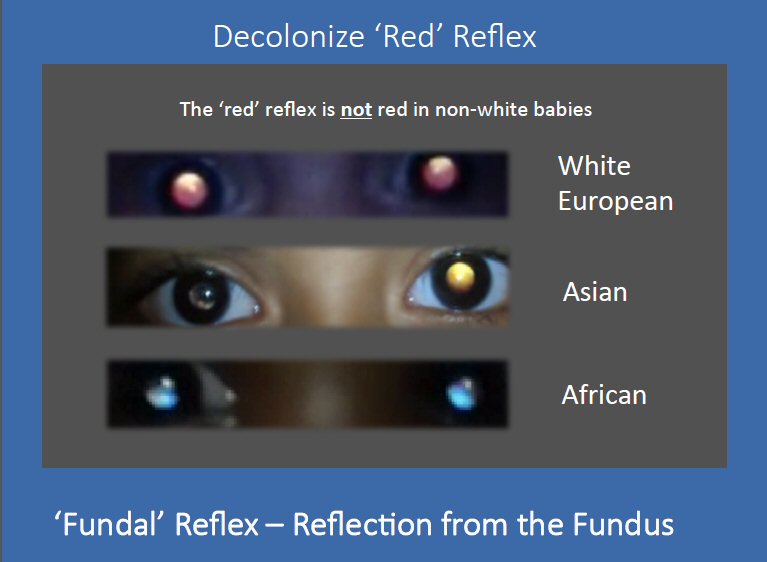 Modern digital cameras have “red eye reduction” features that reduce or eliminate the appearance of fundal reflex in flash photographs.  Some cameras offer both a red eye lamp or “pre-flash” and a red eye correction setting.

The Red-Eye Lamp / Pre-Flash setting causes a bright light to illuminate for about one second, milliseconds before the flash bulb lights up. Pupils contract in response to the bright light, reducing the amount of fundal reflex captured by the camera when the photo is taken with the flash.

Red-eye correction replaces a captured fundal reflex with colours the camera detects in the surrounding area.

Red-eye reduction settings do not guarantee elimination of fundal reflex. However, the chance of the camera detecting a white pupil (the early signs of childhood cancer and other serious eye disease) are much reduced when the pupil is contracted. Therefore, taking regular photos of young children with ALL red-eye reduction settings turned OFF is very important.

If a fundal reflex is naturally absent, or a white pupil is seen in photos when red-eye reduction settings are NOT used, this could indicate a serious eye problem, such as a cataract or cancer.

Use the PhotoRED Technique to check your children’s eyes for healthy fundal reflex. 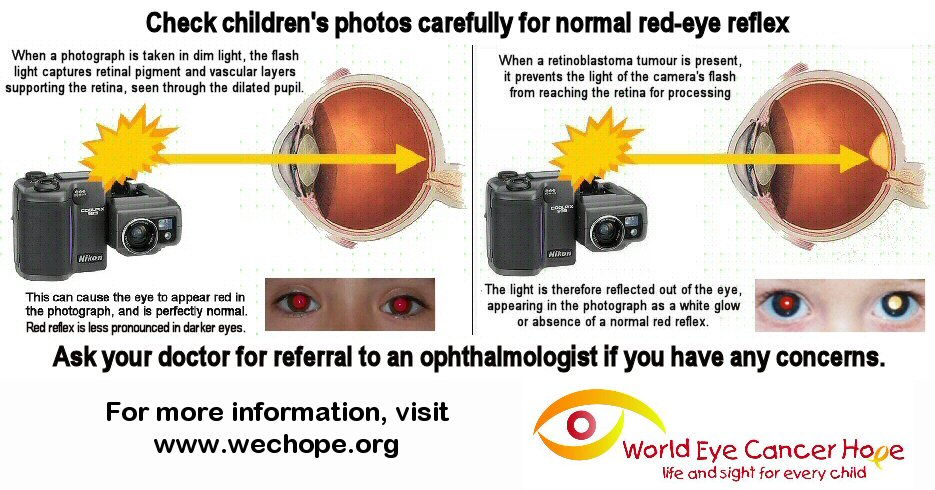