You are here: Home1 / Retinoblastoma Resource2 / Through Our Eyes3 / Unilateral Rb4 / Katelyn (USA)

Katelyn was born on July 12, 1996. I had a normal pregnancy and she was born weighing a healthy 7-lb. 7 ounces. Her first few years were very normal. She attended day care, and loved to perform (being silly) for anyone who would giver their attention.

She was diagnosed with retinoblastoma one month after her 4th birthday,.  We had just returned home from a 2-week camping trip. I took her for her yearly physical with the paediatrician, a mandatory exam in New York for children attending daycare. 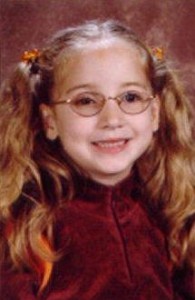 Her doctor noticed something odd with her right eye, as soon as he came into her room.  He looked into the eye with an ophthalmoscope (the hand-held) light) and began asking me all sorts of questions.  Had she complained about any discomfort in her eye?  Had I noticed anything different about it?

Thinking back, I did have an uneasy feeling about Katelyn’s eye when we were camping.  She kept tripping and bumping into everything to her right side.  Her legs had tons of bruises to show for all the falls.  Also, she began showing fear about going down steps.  I had to carry her many times down them.

At that time, I knew we had a doctor appointment approaching, so I just kept close watch over her. Other than that, she never complained. She didn’t act sick, and she ate well.  So of course I thought the doctor’s concern couldn’t be serious.  How wrong I was!

The pediatrician sent us the same day to a retina specialist, who told me Katelyn had retinoblastoma.  He said if this wasn’t treated right away, Katelyn could die.  I felt like my heart had stopped beating and my stomach was being ripped out of me.  I could feel myself beginning to shake, and tried hard not to show that, or cry.

Meanwhile, Katelyn was exploring the doctor’s office, getting into his stuff, not acting in the least like something so serious could be wrong with her.

We live in upstate New York. After some discussion, we decided we would go to Philadelphia for treatment. So the next morning at 2am, we headed for the city, not knowing what to expect.

We met Drs. Carol and Jerry Shields, and after examining Katelyn, they recommended her eye be removed as the tumor was large (14.5mm) and her vision was gone.  She had surgery the following day to remove her eye. I stayed with her that night in the hospital, watching over her all night.

We were released from hospital the following afternoon, and headed for home.  Katelyn healed beautifully and a few weeks later we received wonderful news – pathology found no signs of cancer spread and the doctors felt she did not need further treatment.  We were so relieved!

As a parent, my eyes still draw tears when I think back over the summer of 2000.  How lucky we were to have caught the cancer in time!  From the day we were told she had retinoblastoma, I knew in my heart that no matter what we were to face on the road ahead, it was very important for her, to keep things as normal as we possibly could – though this was Hard!  I had never heard of retinoblastoma. Now I make it a point to tell everyone who has children and grandchildren about it.

I thank God and His angels every day for watching out over Katelyn, and for guiding us to the people who could help her.  Many miracles came about in those three days from being diagnosed to having the surgery.

Katelyn needed time to adjust to what happened to her so I did not send her back to preschool that fall.  The children made her nervous and she needed her mom close by to help her feel secure while she found her way through the experience.

I changed to the night shift at work so I could be with Katelyn during the day.  This worked well and she loved being home with me. I know my decision to keep her home was right. Ultimately she thrived, excelling in school and enjoying gymnastics.

I think the hardest part of the experience for Katelyn was looking at her eye socket after I took the bandage off.  She was scared at first, but I caught her sneaking peeks in the mirror, and after a few days, she accepted her new appearance.  We celebrated the day she received her prosthetic eye. She wanted to show everyone her beautiful new eye.  She was so proud.

I didn’t think to explain to Katelyn that she would not be able to see out of her new eye.  I recommend parents to explain this to your child if they are older, so they won’t anticipate the eye as something that can restore their sight.

Katelyn had thought she would be able to see once she had her new eye. At first she was very disappointed, but just like when the bandage was removed, she graciously accepted things as they came, and simply learned to cope.

This experience has changed me in many ways.  I don’t let the small stuff bother me any more.  I appreciate my life and children much more after going through this.  I’m more patient and compassionate towards others. I value every day I am given to be here with my family and friends.  Most of all, I am so grateful and proud to be the mom of my 2 beautiful daughters