You are here: Home1 / Retinoblastoma Resource2 / Through Our Eyes3 / Bilateral Rb4 / Katy and Harry (UK)

Katy was diagnosed with bilateral retinoblastoma in November 1995, just after her first birthday. We remember seeing the ‘cat’s eye’ reflection in her left eye one day when she sat under a light, but we had no idea how this was to change the rest of our lives.

We were extremely fortunate that Katy was promptly diagnosed by our local hospital, and referred to Great Ormond Street Children’s Hospital in London. A week later, her left eye was removed, due to a huge tumour very close to the optic nerve. 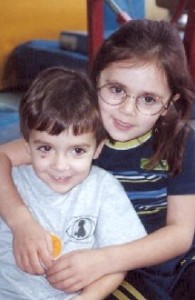 During that surgery, a small tumour was discovered in Katy’s right eye, and she was referred to St Bartholomew’s Hospital, where she received regular EUAs with cryotherapy for several months.

After a while, Katy’s check-ups were reduced to 6 months, and we started to relax. 18 months later, we were devastated to learn she had relapsed with vitreous seeding in her remaining eye. Several courses of chemotherapy had no effect on the seeds, so we tried a radioactive plaque. Unfortunately, this was also unsuccessful.

External beam radiotherapy was felt to be a more proven method, though Katy would probably develop a cataract, as whole eye radiation was needed. She received 20 doses, during which she celebrated her 3rd birthday. We have since learned radiotherapy may also cause second cancers later in life.

Regrettably, radiotherapy did not work either. As a last resort, we tried much stronger chemotherapy, which had powerful effects on Katy’s whole body.

When Katy was diagnosed, we did not have a computer, and knew nothing about retinoblastoma. Our first visit to the Radcliffe Ward at Bart’s was a huge shock as we realised ALL the children had eye cancer. While sifting through information on the internet for us, my husband’s niece, Lisa, discovered that The Hospital for Sick Children in Toronto, Canada, was having excellent results in treating relapsed tumours like Katy’s.

While there were no guarantees, we were at last offered a ray of hope for Katy. After several lengthy telephone calls to Canada, we made the soul searching decision to fly to Toronto.

We were delighted Brenda and Helen felt they could help Katy. She received cryotherapy and laser on the first day of each three-weekly treatment, followed by 2 days of chemotherapy with cyclosporine. Being far from family and friends was very tough, but an EUA three weeks into treatment revealed a decrease in vitreous seeds.   We were elated.

As treatment continued, each EUA showed significant improvement. This was beyond our wildest dreams. We just couldn’t quite take it all in!

I lived at the Ronald McDonald House. My new baby, Harry, was 6 months old when we first arrived in Toronto. Fortunately, my husband’s work allowed him time to see us every three weeks, and our spirits were further lifted by a visit from close friends and my parents – fantastic support.

Harry had a routine EUA during our time in Canada, and we were stunned to learn he also had a very small tumour. Thankfully he was treated with laser and has been RB-free since! The worst thing was dealing with this shattering news on my own, as John was back in England. My new friends in Canada were wonderful to me during this time.

We were due to stay in Canada for 6 months, but returned home early when Katy’s ‘wiggly’ (external central line) fell out. External lines are seldom used in Canada because the internal Port-a-Cath has no open wound and has far fewer complications.

Katy’s vitreous seeds looked dead and calcified. As Brenda was due to attend a meeting in England, she and Helen agreed to stop the chemotherapy and do one more EUA with cryotherapy and laser. Brenda would examine Katy the following month at Birmingham Children’s Hospital, together with Ophthalmologist Harry Willshaw. Harry had worked in Canada previously and knew Brenda. This gave us confidence to return home.

We continued to see Harry Willshaw every 6 weeks in Birmingham. He was wonderful and remained extremely positive, liaising with Brenda after each visit. Later, we were able to transfer back to Great Ormond Street where Ken Nischall, whom we met in Canada, had just became an Ophthalmology Consultant.

In August 2001, Ken successfully removed the cataract which resulted from Katy’s radiotherapy, and inserted a foldable lens implant.

Katy’s eye does not completely close, which has caused some scratches to the front of her eye. So we now use lubricating eye drops every night.

Blood tests performed in Canada located the gene mutation causing Retinoblastoma in our family. We discovered John carries the genetic error, as do a number of his relatives.

We were overwhelmed by how such a devastating and bleak situation was turned around by the fantastic treatment our children received. We are forever in the debt of Brenda Gallie, Helen Chan and their team.

What amazed us most was how well the Canadian team worked together, how their individual expertise is not seen as rivalry, but as a way forward in giving each child and family the best possible care.

On return to England, we purchased a computer and joined some wonderful online Rb support groups. At the time of Katy’s diagnosis, we had no such luxury, and information was difficult to find.

The internet has opened up access to information globally, and we see a desperate need for increased efforts to collaborate internationally. I am glad to support the work of World Eye Cancer Hope to develop such opportunities.