You are here: Home1 / Retinoblastoma Resource2 / Through Our Eyes3 / Unilateral Rb4 / Bright (Cameroon)

Bright was born in 2004, healthy and quickly full of smiles that filled his young parents with hope for their future. Despite the poverty Godwill and Gladys faced in rural north-west Cameroon, they worked hard to set up a loving home for their first child.

With their love and nurturing, Bright thrived. His sunny, chatty nature brought joy to all around him.

In 2006, when Bright was two-years-old, he began to complain of pain in his right eye, and Gladys noticed his eye glowed white sometimes in the dim light of early morning and evening. 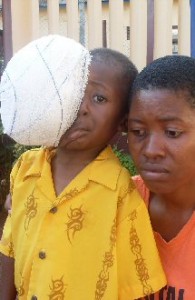 The couple instinctively felt something was seriously wrong with their son. They took him to various district health centres, but no one could tell them why Bright was in pain. In the clinics’ equatorial light, no one could see the strange white glow his parents described. Their observation was repeatedly dismissed as crazy. After several months of fruitless searching for answers, they were finally referred to Acha Annex in Bafoussam, a hospital locally known for its eye care program.

In Bafoussam, Bright was diagnosed with unilateral retinoblastoma, a devastating discovery for the young couple. The cancer filled Bright’s eye and doctors recommended it be surgically removal to protect his life. Godwill and Gladys were shattered by the recommendation. They feared the financial burden and what their son would look like after surgery, but listened carefully to the doctors’ patient explanations and understood that surgery was the only option to save their precious son’s life.

Bright’s eye was removed one week later. Doctors discharged their young patient after the surgery, believing him to be cured by the prompt treatment. The young family returned home, thankful that they had persisted in seeking an explanation for their son’s sudden onset of eye pain. The entire community celebrated his safe return to them, and helped the family as they worked hard to clear the medical bills.

Bright did not receive an artificial eye, and while people were initially unsure of how to respond to this, his happy character prevailed. His name was so fitting – he had a way of drawing people into his light that surrounded him.

The family’s relief was short lived. Four months after the surgery, the skin around Bright’s eye socket began to swell. His parents again took him to various doctors locally. He was diagnosed with post-surgery infections, but multiple treatments with antibiotics over the next few months failed to stem the swelling.

The previous medical bills had left the family with no spare funds. They began saving for a return visit to the eye hospital in Bafoussam, but with a joint income of less than $50 per month, progress was slow. They carefully stowed spare funds in a box tucked away in the neatly kept family home.

By mid July 2007, the family had saved enough funds to return to the eye centre, but the rainy season had arrived early, and the dirt roads were impassable. Godwill and Gladys watched daily for a break in the weather that would allow them safe passage, but the rains continued to fall with unprecedented intensity. In early August, floods swept through the region, killing 8 people and rendering more than 1,250 people homeless. Cattle, farms and granaries containing precious corn and millet were swept away.

While Bright’s home was not destroyed, his family lost most of their possessions, including the box filled with money they had so fervently saved. This was a devastating blow. They no longer had land on which to grow crops to sell to earn and save funds, barely a shell of a house in which to live, and still no treatment for their beloved son.

For the next yea, Godwill and Gladys continued to take Bright to different places, begging for help, to no avail. By October 2008, his face was mutilated almost beyond recognition and though they had no money to pay for treatment, the couple pleaded for a good Samaritan at Bamenda Provincial Hospital to help. The hospital’s Director referred Bright to the Obstetric & Gynaecological Hospital in Yaoundé, the capital city, over 1,200 kim away.

Bright was admitted to the hospital, where he remained for almost six weeks without organised treatment, partly due to the family having no funds, and partly because the doctors did not know what treatment could help. This time in Yaoundé was very painful for Godwill and Gladys, who had never travelled to the city and knew no one there. Their burdens were immense but they clung to hope, daily nourished by small gestures of care from the medical staff and other families around them – a silent hug, a small donation from a nurse to help pay for another dose of pain medication.

Most of all, they cherished a smile from their son. In mid December, a financial supporter of the hospital met Bright during a visit to the ward on which he was admitted. Moved by his situation and his family’s harrowing story, the visitor contacted local media for assistance in raising funds for his care. Support was established locally and in the USA through contacts in Georgia and Maryland.

Despite his pain, Bright maintained his playful spirit, and delighted in company, whenever he could find a friend who did not fear the way he looked. His voice bubbled with the desire for a chance to live, and his gracious smiles, barely visible behind the huge growth, told of his big heart.

The initial hope of his supporters was to bring him to the USA for care, but American doctors advised that his advanced cancer could not be cured and bringing him to America would not be in his best interests. The

cancer had invaded much of his facial bones as well as his brain and bone marrow.

The support enabled chemotherapy in Yaoundé, with the goal of slowing progression of the cancer, and shrinking the huge mass that caused intense pain.

Bright remained in hospital in Yaounde throughout Christmas 2008, surrounded by the love of his ever-present parents. He received a talking computer from supporters in America, which brought a smile to his face despite his ceaseless pain. The nurses placed the computer beside him so he could play without moving his head.

Though his supporters remained faithfully committed to his care, sadly, their love came too late. Financial aid brought a degree of palliative comfort in the last weeks of his life, Bright passed away in Yaounde on January 8 2009, aged 4 years.

Bright’s parents were proactive in seeking care for their son, and he could have been diagnosed earlier had staff at the local clinics known about the common early retinoblastoma sign of white pupil. His life may have been saved if pathological examination of his removed eye had been done and the results clearly understood. Appropriate chemotherapy might have begun earlier if a family support program had been in place to help with the costs of care.

Awareness, access to simple medical care and family support will change and save lives. Our Kenyan National Retinoblastoma Strategy is a model for the care of children with eye cancer in resource limited Africa. Kenya is just once country though. Thousands more children need our help.