You are here: Home1 / Retinoblastoma Resource2 / Through Our Eyes3 / Unilateral Rb4 / Lele (China)

Lele was born on June 7, 2002 in Beijing, China, 40 days earlier than expected. I clearly recall the doctor asking me to give consent for a caesarean he was not sure would be successful. That was my first most important decision I have had to make in my life.

My wife was immediately taken into surgery.  I did not have to wait long until the nurse came out with my son.  He only weighed 1.8kg (3.96 pounds).  Though he was placed in an incubator immediately, we were home after just 1 week. 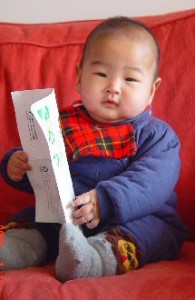 Despite his rough start, Lele grew just like other healthy babies.  When he was about 7 months, our nurse noticed his right eye was often full of tears and looked weepy.  We looked at Lele’s right eye carefully, and didn’t notice anything, but we still brought him to the local Children’s hospital, in February 2003.  The young eye doctor looked briefly at Lele’s eye and said everything was OK.  He didn’t suspect anything serious and sent us home.  Even now, I feel very guilty – if we had taken Lele to the eye hospital, maybe we could have saved his eye…

A year later, during Chinese New Year in February 2004, my wife noticed a “yellow” glow in Lele’s right eye when the room was dark.  She asked me to look, but I still didn’t think the problem was serious.  After the holiday, my wife’s friend helped us contact a doctor at China’s best eye hospital.

We brought Lele to the hospital on March 9, 2004, my wife’s birthday.  A young doctor checked Lele’s eyes first.  He told us immediately the right retina was detached, and Lele could not see with that eye.  However, he was not sure of the cause.  He asked us to see an expert in the afternoon.

Lele had an ultrasound, and the doctor immediately suspected retinoblastoma.  I was so shocked when he told us this is life threatening.  My wife and I were just numb, we didn’t know how to accept that moment.

That night, my wife called the doctor her friend had introduced.  Luckily, Dr. Shi Ji Tong is one of China’s best eye tumour specialists, and sees many children with retinoblastoma at Tongren hospital.  He examined Lele the following morning, and told us the eye must be removed to save his life.  Again, my wife and I just couldn’t believe our son had eye cancer.

We took Lele to all the best hospitals in Beijing during the following few days, but they all told us Tongren was the best eye hospital in China, treating over 500 children with retinoblastoma each year.

In the following days, we told our parents, brought Lele to the park and took pictures.  We wanted to keep some memory of him before enucleation.   We will never forget the invaluable support our relatives and friends gave us in those days.

When I was a little recovered from the pain of this process, I started to learn everything I could about retinoblastoma.  I am very lucky I quickly found the r-blastoma online support group, and some websites parents had established. I asked many questions about retinoblastoma, and people replied immediately to tell me what they knew, including names of the best doctors in the world.

At this time, I realised Lele did not receive an implant during his surgery.  His orbit was completely empty.  The people in the support group emphasized how important it is to insert the implant and prosthetic as soon as possible.

After several conversations with Dr. Shi Ji Tong, he finally agreed, and introduced an oculoplastics doctor.  This doctor inserted an implant during surgery on September 26, 2004.  3 months later, Lele received his first artificial eye, although we can see the difference because that was not custom fit.

Thanks to people’s persuasion in the support group, my son received the implant in time to prevent facial deformity, and most importantly, his spirit is healthy when he plays with other children.  As a result of people’s persistent support, Tongren hospital has changed their approach, now inserting an implant at the time of enucleation.

I still can see differences in Rb care between China and more developed countries.  For example, the tests done at diagnosis and regularity of follow up checks.  This is the first time I noticed that, even in most developed cities in China, there is a big disparity between the medical treatments and resources here and in developed countries.

So many children with retinoblastoma in China, especially children from the countryside, don’t receive treatment because their parents cannot afford expensive medical care.  Some children never come back after enucleation  because their homes are far away from Beijing, I wish they would still have checks even in their local hospital.  One day I hope I can do something for them.

Lele will be 10 this month.  He is very healthy and enjoys life like all other children.  My wife and I know there are a lot of challenges ahead, but we believe deeply we will win all battles.  We thank everyone who has helped and will help Lele in his Life.  Most important, we wish he will be like Abby White, a lady with a heart for loving all people in the world.

I Thank God for bringing Lele to us.  He teaches us so much in life, and we are so grateful to be with him, growing and walking together.