You are here: Home1 / Retinoblastoma Resource2 / Through Our Eyes3 / Unilateral Rb4 / Jordan (USA)

Jordan’s story is like many I have seen, read and heard of over the years, though at the time of her diagnosis and treatment, my wife and I were absolutely clueless about this disease.  We had not heard of eye cancer in children, especially not in a baby.

Jordan was a very healthy infant, reaching all her milestones and giving us great joy. Around 7 months old, we started noticing what we thought was a lazy eye. I made an appointment with our family doctor, not a pedetrician. He checked her for a lazy eye and informed us he thought it would take care of itself and we should just keep checking it from time to time. 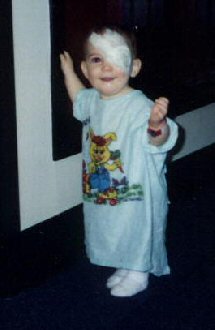 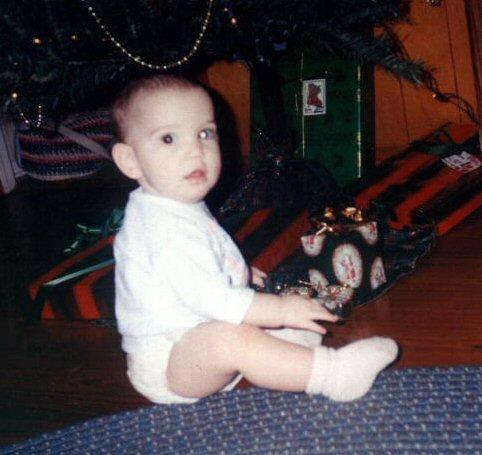 Over the next couple of months we started to notice the white glow, cats eye reflex, in pictures. Then one night while playing with her, the light hit her eye just right and we saw her eye looked milky. We made an appointment the next day with an ophthalmologist. I was working that day and will never forget the conversation when I called to check on Jordan. My wife Jean was crying and could only say “tumor”.

I immediately left work. Our local ophthalmologist referred us to the LSU Eye Center in New Orleans Louisiana, about 2 hours from our home in Mississippi.

We met with Dr. Peyman and Dr. Greive the next day. They tried to give us other causes for what were seeing, but we could tell by their manner that they were fairly sure Jordan had cancer. An appointment was made for a CT scan the following week, and immediately after the scan, they told us they needed to do an Exam Under Anesthesia.

We checked into the Children’s Hospital in New Orleans the next week. After the EUA, the doctor gravely informed us Jordan had a large tumor filling her whole eye and requested permission to remove her eye.  Of course we were floored, but we felt this was the best course of treatment for our daughter.

We were introduced to her oncologist, Dr. Lollie Yu.  She explained that during the surgery, they would take part of the optic nerve with Jordan’s eye, as well as bone marrow, to make sure the cancer had not spread to other parts of her body.  Again, we were floored – we had not even thought of it possibly spreading. We waited on pins and needles for the results.

When the pathology report finally came, it was a great blessing. There was no sign of cancer anywhere else.  We were to bring her in for regular check ups and if everything went as they expected, no other treatment would be required.

Of course, in between all of this we found out about the sporadic and hereditary forms of retinoblastoma.  With no prior family history though, and after both my wife and I had eye exams, the doctors were confident Jordan’s cancer was the sporadic form.

Everything went by so fast, but in retrospect that was probably best. We really had no time to sit and ponder the consequences of this disease. After Jordan’s enucleation, I had the opportunity to research retinoblastoma a little, and I am glad this happened after the surgery. I think we would have been a lot more worried if we’d had time to read about all this disease entails. I went to the library a couple of times, but found that only scared me. So I just trusted the judgement of the team of doctors caring for Jordan.

We put our faith in God and the doctors to lead us in the right direction, and were blessed with an outcome, though not the absolute best we could have had, that was the best for Jordan in the long term.

We have a very close family and community. Jordan was on so many prayer lists at so many churches, and we were truly amazed by the care of our friends and neighbors during this time. One family contacted us whose daughter had Rb and had grown into a very healthy young woman, and this helped immensely.

I think what helped us cope best was Jordan response to everything. She was only 9 months at the time, but such a trooper. She had so many people examine her over the course of just her diagnosis. LSU is a teaching hospital and, due to the rarity of Rb, a constant stream of pedeatric interns came to see what Rb looked like. This was hard at times, but we felt in the long run if one intern caught Rb early because of looking at Jordan’s eye, it was well worth the stress.

I am awed by how well children thrive. Jordan walked unaided for the first time on the day after her surgery. She just took off down the hall with the surgical pressure patch over her eye, exploring the hallway.   Watching her go gave us so much comfort and hope.

I think the toughest part of the journey has been the prosthetic eye. Jordan did not like the process of making or maintaining the eye at all. She fought it every time we went for a fitting, or just when we tried to remove it for cleaning.

Today, I am happy to report that Jordan is a healthy thriving young lady. We did have one freaky coincidence along the way: 7 years exactly to the day after her surgery, she had surgery to remove her appendix. We thought that was a little spooky, but I told her that was the end of her 7 years of bad luck.

Jordan has adjusted well to life with one seeing eye. She is an exceptional soccer player and also took up dance, gymnastics and ballet as a child. We continue regular annual exams of her “good” eye, but everything is clear. Her younger sister, Jamie never developed retinoblastoma, so we have been truly blessed.

This experience has made us appreciate things more. We don’t worry so much about the whole scheme of things anymore, but concentrate on just enjoying the days we share as a family. I am a doting daddy.  Although I love both of my girls very much, I truly admire Jordan’s grit and courage. I’m sure as you know, young peers can be quite frank and cruel sometimes, but Jordan handles everything so well.  She truly has conquered her cancer!