I am the mother of a child with retinoblastoma. I live in a quiet neighborhood in Racine, Wisconsin, and once had a quiet, typical life.

I cannot tell you about childhood eye cancer without first telling you about two parents who waited eight long years for a baby, loved him for all they were worth, and then fought with all they had to save his life.

Our story began shortly after our son, Ross Richard, was born and I took him for his six week well-check. 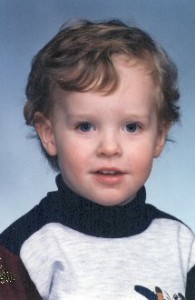 I was convinced there was a problem with my new baby’s eyes and even asked his pediatrician if he could possibly have Down’s Syndrome.  He laughed, and reassured me that I had a fine, healthy baby.

Throughout the first year of his life, I continued to ask at each check-up.  Didn’t the doctor see the one eye turned in just a bit?  He didn’t.  Finally, he told me to see an ophthalmologist to set my mind at ease.  I was there within the week.

Ross was thirteen months old when he was officially diagnosed with bilateral Retinoblastoma on January 21, 1992, by Dr. William Mieler at The Eye Institute in Milwaukee, Wisconsin.  An exam under anesthesia showed multiple tumors – a large one in his right eye had completely disrupted the optic nerve, blocking all vision.  Four smaller tumors in the left eye were on the peripheral and were treated with cryosurgery.

Six weeks of radiation later, we were told the tumor was beginning to die off, shrivel, and actually was pulling away from the optic nerve.  During this time, Ross had a CT scan to rule out any other tissue involvement.  EUA’s continued six weeks apart for the following year as the tumor continued to shrink and Ross actually regained some vision in that eye.  We were assured that he would live to a ripe old age.  We were hopeful.  We became one of the contact families for Retinoblastoma – new families would call us and we could offer encouragement.

We had two normal, apparently healthy years.  Ross was a demon toddler, and an early, non-stop talker.  He was clever, curious, and demanding.  He potty-trained himself out of pure stubbornness.  I enrolled him in early preschool, thinking it would help with his hand/eye coordination.  We flew to Disney World (his favorite place) and bought a pop-up camper for traveling.  I was incredibly grateful and very aware of my normal, happy life.

Ross awoke one morning in May 1994 with enormous lymph nodes.  Of course, I panicked.  I ran him to the pediatrician who assured me that many things can cause enlarged lymph nodes.  I was told to “wait and see”.  The next month was nothing but running from one doctor to another.  All said the same: “nothing to worry about, “retinoblastoma never spreads“, but my son was fading before my eyes – night sweats, back pain, no appetite…

I’d had enough.  On June 10th, I loaded my boy in the car and took him to Children’s Hospital of Wisconsin, unannounced.  I gave his medical history and within hours we were in-patient in the Hematology/Oncology & Transplant Unit.  CHW is a teaching hospital, so we got the opinions of many doctors and students whose  Consensus was that Ross possibly had a bone infection.  We were given antibiotics and sent home with a June 23 return appointment.

By that date, Ross could barely walk, had lost ten pounds, and was in constant pain.  The decision was finally made to do a bone marrow aspiration.  It showed what I had known all along – retinoblastoma had spread throughout his body.  An MRI showed cancer in his sinus cavities and throughout his spine.  We were dealing with metastatic disease.

At that point, our doctors, Steven Weitman and David Margolis, told us we had two choices.  We could try risky chemotherapy treatment that had achieved little success, or we could take Ross home to die.  I could not just give up – not then.  Following Dr. Charles Pratt’s protocol from St. Jude Children’s Research Hospital in Memphis, and supported by our wonderful doctors, Ross got his first dose of Cisplatin, followed by two days of VP-16.  Within three days, we could see the lymph nodes had shrunk.  With his pain under controll and anti-nausea meds, Ross started eating again.  By the end of the week, we were in the playroom and our new life had begun.

In September, we went to Children’s Memorial Hospital in Chicago to meet with Dr. Morris Kletzel.  He had seen some success with stem cell transplants in children with Neuroblastoma and agreed to treat Ross.  We did two rounds of stem cell collection, and began the workup towards transplant.  Back in Milwaukee, Ross had another routine EUA, showing apparently stable tumors with no activity, no optic nerve, brain, or central nervous system involvement.  On October 13th, his final test – a bone marrow aspiration – showed retinoblastoma cells in his bone marrow.  The transplant was put on hold.

They say hindsight is 20/20, and I now see that day as the beginning of our end.  We never regained remission.  We tried Growth Hormone, which seemed to anger the cancer and make it more aggressive.  By November, I could see the cancer had spread to his liver, enlarging it.  We tried an experimental and very strong chemotherapy, Topotecan, with initially good results.  It bought us a little more time.

On December 19th, 1994, at 1:10 a.m., I made the decision to stop Ross’ treatment and suffering.  Just nine days short of his fourth birthday, my beautiful boy died in my arms.

Death has forever changed me, but Ross taught me about love and grace.  He taught everyone who knew him about friendship and giving.  I look at all things differently now, having seen life through his eyes.