Bisrat was born in Addis Ababa, Ethiopia, on 28 November 2009. His name means “Good News” in Amharic, and he is indeed a very great blessing.

Before he was one month old, Bisrat’s grandmother began to notice his eyes moving rapidly, and a white glow in his right pupil. She insisted he have a check-up, but a doctor at the local hospital told Ermias and Netsanet the glow was normal and he would outgrow the eye movements. 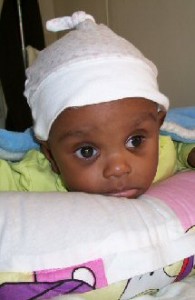 Seeking reassurance, Ermias took his son to Menelik II Eye Unit in Addis Ababa. There, an ultrasound revealed Bisrat had cancer in both eyes, and doctors advised immediate removal of both eyes. In shock, Ermias sought a further opinion, but doctors at Black Lion Hospital concurred that Bisrat’s eyes should be removed.

Ermias and Netsanet shared this devastating news with their parents. Bisrat”s grandfather resisted the surgery, insisting his family pray and trust in God’s healing power.

His father in law’s concerns fired Ermias’ resolve to find an alternative. Using the internet, he found doctors in Sweden and Thailand willing to treat Bisrat, but the high costs and distance discouraged him.

When almost giving up hope, a colleague discovered Daisy’s Eye Cancer Fund (now World Eye Cancer Hope). Ermias began combing through its pages. He researched late into the night, carefully translating into Amharic for Netsanet. Finally, on 25th March 2010, he emailed the organization for help.

Within two days, Ermias had more information on retinoblastoma than he had gathered in weeks. He also had an answered prayer – treatment just across the border in Kenya. This was a huge relief, but while the Daisy Fund team organised travel and encouraged Ermias to focus only on his son’s wellbeing, he continued to worry about medical bills.

Ermias, Netsanet and Bisrat arrived in Nairobi on 30th March 2010. Brian Ouma (then CEO of Daisy Fund Kenya), drove them directly to Kenyatta National Hospital (KNH), where Bisrat was admitted to a ward dedicated to children with retinoblastoma.

Doctors quickly determined Bisrat’s cancer-filled left eye must be removed immediately to protect his life. Mercifully, pathology showed cancer had not spread beyond the eye – the surgery was done just in time.

Tumours in Bisrat’s right eye covered the macula, which controls central vision, and lay close to the optic nerve, the conduit to the brain. Dr. Kahaki Kimani, Director of the KNH Retinoblastoma Team, explained that her first priority was to protect Bisrat’s life. However, she hoped his eye might be saved with chemotherapy, laser and freezing treatments.

After each cycle of chemotherapy, Bisrat received a blood transfusion and daily injections to reduce the risk of serious infection. He was sick and cried constantly, and the experience was very hard for his parents. However, Bisrat’s tumours were not responding to treatment.

Fearing the cancer could invade his optic nerve, Dr. Kimani advised Bisrat’s eye be removed to protect his life. So Bisrat’s eye was removed when he was 7 months old. Ermias and Netsanet found the decision easier to make this time. Knowing they had tried to save Bisrat’s eye gave them peace, and the support around them was a great comfort.

In Ethiopia, the couple struggled to make decisions because relatives, friends and neighbours offered advice with no understanding of cancer. “In Kenya, it was just the two of us”, says Ermias. “We shared all decision making, and it was much less complicated.”

Several weeks after surgery, pathology confirmed the cancer was contained and Bisrat would need no more chemotherapy. Before returning home, two artificial eyes were made for him at Kikuyu Eye Unit.

Netsanet says the experience has strengthened the couple’s love. “Even with no other man in the ward, he did not shy from doing anything for me and the baby, even bathing the baby! His willingness to help me understand what was happening to our boy was just marvellous! If I was asked to marry again, I would marry Ermias!”

Ermias encourages parents of children with retinoblastoma to work together for their child. “If you cooperated to bring the child to this world, why not cooperate when a challenge like this faces you?”

Dr. Kimani emphasises that having both parents involved in their child’s care not only improves the family’s wellbeing, but also aids the medical team.

“Three in four children die at KNH. Often parents refuse eye removal surgery, or the child fails to complete treatment and follow up care. When parents work together, decisions are more easily reached and treatment is administered without a lot of resistance, giving the child the very best chance of cure and a long, happy, healthy life.”

Partnering with Habesha Restaurant and Nairobi’s Ethiopian community, Daisy Fund raised almost half a million Kenyan shillings. The money covered his medical bill and two custom fit artificial eyes. Family friends back home in Ethiopia also put their hands together to help with daily living needs during the family’s four month stay in Kenya. After these costs, still half the funds remained – almost US$3,000.

Ermias and Netsanet could have kept the money to provide for Bisrat’s needs as he grows older. However, they graciously chose to donate the money to help other families in need fighting retinoblastoma.

“We are happy because we tried our best to save Bisrat’s vision” says Ermias. “Removing both eyes without trying any treatment would have been a wound that may not have healed. Now we don’t say ‘we should have tried this’ or ‘we should have gone there’. We have a beautiful story to tell Bisrat when he grows up.

“The entire World Eye Cancer Hope team made our stay very comfortable. We felt cared for, and less homesick with their support. Words cannot express the good feelings we have for WE C Hope. We thank you every time we see the happiness of our sweet and smiley baby.”