You are here: Home1 / Retinoblastoma Resource2 / Through Our Eyes3 / Bilateral Rb4 / Peter (Kenya)

In his fourteen months of life, Baby Peter has been through more than most people experience in a lifetime. He lives in Dondori, a rural farming community in Nakuru County, central Kenya, with his parents, Wairimu and Kamau* and 27 month old brother.

When Peter was three weeks old, Wairimu began to notice a white glow in her son’s left eye while breast feeding him. As he rested in her arms, the light occasionally appeared to reflect deep inside his pupil, but it was never more than a fleeting glint in the dimly lit room. 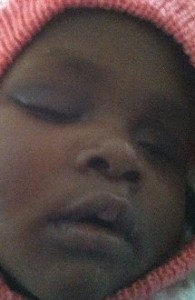 As Peter did not seem to be in pain nor have any difficulty seeing, she thought little of the strange phenomenon.

Wairimu was diligent in taking Peter to well baby checks offered at the Dondori health clinic. When he was 3 months old, she took him for regular check up and mentioned the strange white glow. A visiting doctor checked Peter’s eyes and, suspecting retinoblastoma, urgently referred him to Nakuru Provincial General Hospital (NPGH). Wairimu did not have money for the bus fare, so the doctor provided funds as he recognized Peter’s need for prompt specialist medical care.

In Nakuru, an eye exam and ultrasound confirmed Peter had retinoblastoma. However, the nature of this life threatening cancer was not clearly explained to his mother. Doctors at NPGH told Wairimu that Peter had something growing in his eyes and she needed to take him to Kenyatta National Hospital in Nairobi.

Due to lack of finances, Wairimu could not travel to Nairobi immediately. Not suspecting the gravity of her son’s situation, she returned home to work as a casual labourer on a farm, saving funds for travel to the city. She did not understand her son had cancer, nor the urgency of care. Finally, after three months of hard work, she had saved enough money to enable travel to Nairobi. By this time, Peter was six months old.

Kenyatta National Hospital is a leader in the care of children with retinoblastoma in East Africa, with facilities that offer rare opportunity to save eyes when cancer are relatively small. Doctors hoped they may be able to save Peter’s second eye with a combination of chemotherapy and laser and freezing therapies applied directly to the eye. Sadly, at a regular eye examination under anaesthetic (EUA) two months into treatment, they found the eye had not responded to therapy. The only safe option for Peter was removal of his second eye.

The decision to enucleate both of Peter’s eyes was hard for Wairimu to make, though the doctors explained her child’s survival depended on it. Peter’s father, Kamau, is also blind. He too had both eyes removed as a young child, though he never knew why. Older community members tell that he lost his eyes to cataract, possibly because his parents observed the white pupil glow typical of retinoblastoma – which is also seen in people with more well-known cataract.

Wairimu had not discussed her husband’s blindness with doctors in Nakuru as she did not make any connection between this and her son’s white eye glow. At that time, Peter’s vision appeared to be normal, and Wairimu never imagined the possibility of her son losing his sight. Only when she arrived at KNH did doctors ask about sight loss in other family members.

Having a blind husband and son is a big challenge for Wairimu. She feels isolated and alone in handling the problems that arise daily. Kamau was not educated as a child due to his family’s lack of funds to send him to a special school for the blind. His blindness is a major barrier to finding work in the informal sector, and as a result he has no prospects for work to help support his family.

Wairimu is consequently the sole breadwinner of the family. She also carries the burden of taking her two young children to the farms where she works. She and Kamau are not confident about leaving one active, inquisitive child and one sick, blind child who is just beginning to walk, alone with their blind father who has never had the opportunity for mobility or life skills training.

Life is a constant challenge for a casual farm labourer. As agriculture is determined by the seasons, work is transient and often unpredictable. Peter’s family only make ends meet during the planting and harvesting seasons. During the rest of the year, income is minimal, and they sometimes default on rent payments for close to four months. When crops fail due to bad weather, the family are pushed to the very edge of survival.

Feeding and clothing her family is a heavy burden for Wairimu, but her greatest worry is that when her children are of school age, she may not be able to send them to school.   She knows education is their only hopeful path out of poverty. Peter especially faces many challenges as special education is not available close to home and is significantly more costly than regular education.

Despite all the treatments and hospital visits, Wairimu and Kamau have at least one less worry now. When she arrived in Nairobi, World Eye Cancer Hope helped her obtain a NHIF (National Hospital Insurance Fund) card which covers all inpatient medical care. Peter no longer risks being detained in hospital after treatment due to unpaid bills, and his parents are confident he will complete treatment without the threat of delay due to lack of funds.

Peters family have hope that he will survive retinoblastoma, and they dream of a better life for him as he grows older, of future children blessing his family without the heartbreaking challenge of eye cancer before life has even begun.

* We have changed names at the parents’ request to protect their privacy.