You are here: Home1 / Retinoblastoma Resource2 / Through Our Eyes3 / Bilateral Rb4 / Bella (Philippines)

After healthy pre-natal care, positive experience and normal pregnancy, I gave birth to my daughter, Chariabella on July 29, 2009 at Mt. Alvernia Hospital in Singapore. Two days later we took her home.

Chariabella received a clean bill of health at the hospital. She passed the newborn screening tests and seemed very healthy. She did not even have jaundice as my other children had experienced at birth.

The next 60 days were spent cuddling, getting to know each other, breastfeeding her, taking the necessary care. 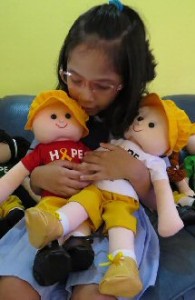 This was emotionally daunting and physically draining because I also had another baby boy to take care of.  He was only one year old.

Chariabella would often vomit and kept crying.  I felt something was not right. During her third month of life, I saw a reflection like a cat’s eye consistently in her left eye for days.  I went online to get chock-full of helpful information.  The questions, the not knowing what was in store, prodded us to seek help from a pediatrician.  He scheduled us to see a pediatric ophthalmologist at once. In two days, our world swiftly changed.  Tests showed Chariabella had big tumours in both eyes, bilateral retinoblastoma stage IV.

On October 29, 2009, Chariabella’s left eye was surgically removed (enucleated).  We stayed at KK Children’s Hospital for weeks as chemotherapy began with the goal of saving her right eye.  We were usually in the hospital 7-10 days for each admission.  During the first quarter of 2010, Chariabella also had an orbital eye implant, a custom-fit prosthesis in the left eye and a portacath insertion in her right chest, a central line to deliver chemotherapy more easily.  By her first birthday, she had undergone 15 laser surgeries, 12 EUAs (eye exam under anaesthesia), and 9 cycles of chemotherapy.

We experienced tough and frightening times.  I well remember the difficulty whenever serious infections were present, low blood counts or severe nose bleeding, when Chariabella was treated in Pediatric Intensive Care Unit, or received blood transfusion in the ward and was in close medical supervision.

After a while, our baby girl would bounce back at life, stable as if nothing happened.  Yet extended hospital stays, twice weekly clinic visits, side effects of chemo and the constant possibility of unexpected hospital admissions meant stress and exhaustion for all of us.  And looming in the background of it all, the unspoken worry: will our daughter get through this?

While absorbing the reality of the cancer diagnosis and treatment, we had many practical challenges.   We had a single meagre income with four children.  Medical bills piled up.  Given the magnitude of our situation, our family decided to migrate to the Philippines after 15 years of residing in Singapore.  We sought medical help there for Chariabella.

In 2011, our daughter’s immune system was at its lowest. She was hospitalized due to pneumonia, asthma and tuberculosis.  In 2012, her right eye began to swell and bulge.  The cancer had relapsed.   MRI of her brain and orbits and bone marrow aspirate test indicated no cancer spread outside her eyes. We thank God it did not metastasize.

After three cycles of chemotherapy, Chariabella’s right eye was enucleated on August 9, 2012 at the Philippine General Hospital.  We experienced this amidst disastrous storms that hit the Philippines between Typhoons Saola and Haikui, causing major streets to become flooded in metro Manila and surrounding regions.

Despite the onset of blindness, Chariabella continued with another 3 cycles of chemotherapy to protect her life.  She was under the care of excellent doctors – Dr. Ramon Severino and Dr. Gary Mercado.

This has been a hard time in our lives, to say the least.  But the amazing outpouring of support from Ms. Abby White at Daisy’s Eye Cancer Fund (now World Eye Cancer Hope) and fellow Rb Moms in Facebook has gone a long way to making it easier, keeping our hope alive.

Chariabella has been in remission for a year and a half.  She may be blind, but her fighting spirit to LIVE never wanes.  She is full of joy and hope in her heart. We pray continuously for her complete healing, and unite with other families who have the same plight.

With optimism, I launched “Doll for Life” in Manila two years ago to celebrate Childhood Cancer Awareness Month (September).  I designed the dolls myself and named them “Kalby”.  They have no hair under a removable yellow hat, and wear yellow shorts with colorful shirts baring the message – “HOPE for Retinoblastoma”.  A variety of handmade dolls with hair and cute dresses can also be custom-made.

Kalby and other dolls in my Chariabella Collection are super gifts, and every doll sold helps families bring their child one step closer to treatment.  The profits pay for travel to hospital and other small expenses that ease the burden of inpatient cancer care.

300 Chariabella Dolls were also sold to buy food and medicine in response to the Bohol earthquake and Super Typhoon Haiyan disasters that hit the Central Visayas region of the Philippine Islands.  Santa dolls were given as Christmas gifts to children fighting eye cancer and to other sick children at East Avenue Medical Center where Chariabella’s life was saved.

Truly, God has a purpose in our lives.