You are here: Home1 / Retinoblastoma Resource2 / Through Our Eyes3 / Unilateral Rb4 / John (Kenya)

When John was a year old, I noticed his eyes didn’t follow together properly.  His father also had a squint, but it didn’t cause him any major problems with his sight, so I wasn’t concerned.

It was when I began to see a white glow in John’s eye a few months later that I knew something was wrong.  I first noticed the white reflex when I was breast feeding him, the light shining down into his eyes as he lay in my arms.

I took John to Nyahururu General Hospital in central Kenya. 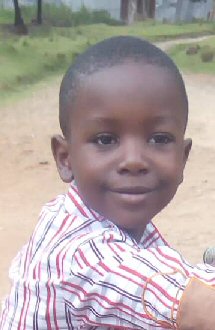 After an eye exam, the doctor referred us to Kenyatta National Hospital (KNH), but he didn’t tell me the problem.  My worry was how that glow would be removed – little did I know what awaited us in Nairobi.

The next day I left for Nairobi.  But I first took John to Lion’s Eye Hospital, which provides charitable care for children.  The doctors there still insisted we go urgently to Kenyatta.  That was the moment I began to fear for my little boy…

We arrived the same day at KNH.  John went through many exams, tests and scans. I was accompanied by his father and my sister.  Finally, the doctors broke to me the worst news in my life… John had cancer, retinoblastoma, in one eye.  The only treatment to save him was to remove his eye.  I was told we must be admitted for urgent surgery, but I refused.  I thought they didn’t know what they were saying.  I was devastated.  I really cried a lot that day.

I couldn’t imagine my 17 month old son without an eye. But after a lot of counselling, I consented to the surgery.  John was admitted and booked for theatre.  My worst fear and anxiety was giving my innocent child to the doctors and waiting for many hours, not knowing what was happening behind those doors.  Eventually, John was ready to return to the ward, and I was called to join him.

On seeing the big bandage on his face, I didn’t control my tears.  The mothers and nurses on the ward were of big help to me. They tried to counsel me and encourage me that we were many on this journey, we are not alone.

When the bandage was removed a few days later, I saw that John had come from the theatre with his prosthetic eye already in place.  He had a well fit eye that was so good, even some of the doctors confused the eyes.  I don’t know the stories I would be telling people today if John had no prosthetic eye.  It has been of great help because no one knows unless told… It helps me avoid being reminded that my son is missing one real eye.  He is also confident because he looks like all other children with it. I thank God for whoever invented prosthetic eyes, for whoever brings them to Kenya the heart and soul of our children.

After the surgery, the pathology results confirmed my son needed more treatment to ensure the cancer would not spread to other parts of his body.  He was given four courses of chemotherapy, each of three weeks duration. The challenges of travelling every time for treatment were tiring and costly.

John has a twin brother, Dan.  Caring for both boys was challenging, especially as they were both still breastfeeding throughout treatment, and bringing both boys with me was exhausting.  I remember the day they were to both go for EUA at the same time.  I was so worried for them, and afraid of what the results would be.

But eventually we were through with chemotherapy.  We had to continue with EUA every three months, then less often.  Finally we are moving on.

John came to realize his eye was not real when he was four years old.  I thank God he didn’t take it badly. He thinks he has a supernatural power as he can remove and put back his eye. Dan, his twin brother, has been very understanding because sometimes John has high tempers.

The worst of this entire experience is that John’s father didn’t have the faith to face the journey with us.  He abandoned us, thinking that my son would succumb to the disease, and I was wasting money seeking care for him.  He didn’t believe that a child’s eye cancer could be cured.

I have been struggling alone with my children till now.  They celebrate their seventh birthday in May 2019.  It’s hasn’t been easy for me to raise and educate them, being a single mom without any job. But all in all I thank God for the miracle of healing my son, for giving me courage to fight this battle and for giving John his wonderful supportive twin brother, Dan.

I also thank my family and the entire KNH community led by Dr. Kimani and Dr. Njambi. I wish the world can understand the challenges, pains, and struggles this process takes.  If I had the powers to make the world aware of this disease, our precious children won’t be losing life and sight.