You are here: Home1 / Retinoblastoma Resource2 / Through Our Eyes3 / Bilateral Rb4 / Daisy (UK)

Daisy was a healthy baby, growing and developing like any other child.   People stopped her family in the street to comment on her beautiful piecing blue eyes.

After diagnosis, Daisy’s parents wondered if they should have known something was wrong.  Was her preference to shuffle on her bottom rather than crawl a sign, or that she was such a tactile baby who loved to explore with her hands? 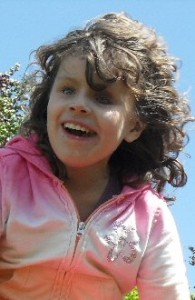 3 weeks after Daisy’s first birthday, her mum and dad took her to the local A&E (Exeter), thinking she had an eye infection.  Her eyes were bloodshot, had slight discharge and her lower lid had started to swell.  The previous week they had noticed she might be developing a squint as one eye did not track well.

Daisy was admitted overnight as one eye began to swell with pressure.  The next day, an ultrasound scan found her eyes were full of cancer and the pressure was due to bleeding inside.  She was referred to Birmingham Children’s Hospital.

No one had realized Daisy was nearly blind.  She did everything a sighted baby would do.  She met all her developmental milestones and was even walking.

The next day, Daisy began aggressive chemotherapy, laser and cryotherapy for 9 months.  Despite this, her first eye had to be removed after only 2 months.  After this treatment, she was cancer free for only 6 weeks.

Over the next 3 years, Daisy had several types of chemotherapy and repeated cryo and laser therapy, 22 doses of whole eye radiation and a radioactive plaque.  More aggressive chemotherapy followed, but none of these treatments worked.  Finally, no options remained in England but removal of her remaining eye.

Daisy’s parents spent many hours researching treatment options in other countries that might offer some hope.  This led them to the retinoblastoma team at Toronto’s Hospital for Sick Children, and an aggressive chemotherapy protocol that showed promise in treating relapsed tumours like Daisy’s.

Daisy and her family flew to Canada for what turned into a 15 month battle to avoid enucleation surgery.

The Toronto Protocol involved chemotherapy and focal therapy every three weeks, together with Cyclosporine A to combat multi-drug resistance.  The treatment was initially very effective in destroying Daisy’s tumors.

Unfortunately, persistent bleeding from previous treatments in England prevented the doctors from clearly seeing Daisy’s retina.  The risk of missing new cancer activity eventually became too great, and Daisy’s eye was finally removed in February 2004, a month before her 5th birthday.

Though she has been cancer free for more than five years, Daisy has a high risk of second cancers due to her treatment history and constitutional RB1 gene mutation.  She regularly attends retinoblastoma follow-up and general oncology clinics.  Most things people take for granted, like bumps, moles, headaches and aches must be checked out to protect Daisy’s life.

Radiotherapy damaged Daisy’s pituitary gland.  She has had hormone injections and is short for her age.  She hates hospitals and still has nightmares about treatment – when she sleeps.  She has amazing artificial eyes and enjoys changing the colour each time she has a new set made.

Daisy loved her mainstream schooling with a Visual Impairment support unit, but needs to socialize and learn alongside other VI children as well.  Without this, she gets fed up of often being the only blind child.  She is an excellent skier and amazing on a trampoline.  People often comment “she can see, can’t she…?”

When they heard about Rati’s plight, Daisy’s parents didn’t hesitate to offer her family the hope they had been given.  Today, World Eye Cancer Hope is a beacon of light for all retinoblastoma affected families, bringing hope of life and sight for every child.