Rosalie first saw a white glow in her Ella Nina’s eyes just one week after her daughter’s birth. She knew something was wrong, even though other relatives couldn’t see what she saw.

She consulted a number of doctors in Bujumbura, the capital of Burundi in East Africa, where the family live. Eventually, cancer was diagnosed in both of Ella Nina’s eyes.

Ella was 1 month old. Doctors told her horrified parents her sight could not be saved, and her young age prevented safe eye-removal surgery.  They sent Ella home to die. 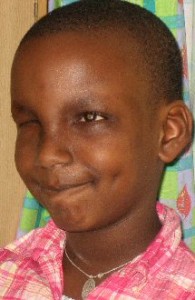 Unconvinced, Rosalie took Ella to Kenya for a second opinion, thanks to help from Oxfam, with whom she worked.  Though good retinoblastoma care was provided at Kenya’s national referral hospital, doctors who saw Ella at a private hospital referred her to England for treatment

Only Rosalie could travel to London with Ella.  Her husband remained at home, supporting his wife by caring for their other children and maintaining an income.  The couple were devastated when doctors told them Ella’s right eye must be removed to protect her life, but Rosalie reluctantly agreed, encouraged by positive stories from other families whose children had only one seeing eye.

Several small tumours in Ella’s left eye were treated with a radioactive plaque, laser and cryotherapy.  Rosalie’s hope grew for her daughter’s future, and she was delighted to return home with positive news for her husband.

Oxfam provided a loan to meet the costs of Ella’s treatment and stay in London.  However, on return to Burundi, poor communication left Oxfam unaware of the ongoing risk of relapse and essential need for close follow up care.  Ella’s eye was to be examined every month, but her family’s loan repayments hindered effective follow-up care in Nairobi, and she was barely seen once a year.

Ella struggled with low confidence, largely because she did not have an artificial eye.  Some fearful people called her “the child with the cursed eye”.  Others were drawn into the light that radiated from her, and saw only a beautiful child with much love and talent to share with the world.

Aged six years, Ella began to complain of poor sight and pain in her remaining eye.  An exam in Nairobi revealed extensive relapse of cancer to the front of her eye, and she was again referred to England.  Rosalie’s heart was heavy with fear as she travelled to London with Ella and her baby daughter, Muriella.

Doctors recommended a course of external beam radiotherapy in an attempt to save Ella’s remaining eye and restore some sight.  However, the family had little financial support, and the cost was an impossible burden.  Doctors worked hard to find a solution, and Ella began radiotherapy in August 2007.  She had fewer doses than is usual, at a higher dose.

Rosalie incurred more debt during their three month stay in London, but hoped this latest treatment would destroy the cancer for good.  By October 2007, the tumours appeared stable, and Ella’s sight had improved significantly.  She could again read and looked forward to returning to school.

While in London, friends contacted Daisy’s Eye Cancer Fund (now World Eye Cancer Hope) for assistance.  We learned that baby Muriella had not been screened for retinoblastoma,   Due to the heritable nature of bilateral retinoblastoma, screening is essential to detect cancer early in siblings until genetic testing establishes true risk.

We co-ordinated an eye exam for Muriella in London, and genetic testing, which was generously provided free of charge by Retinoblastoma Solutions in Toronto. Two weeks after receiving blood samples, results showed Muriella does not carry the gene mutation that caused Ella’s cancer.  She required no further follow up, a huge relief to her family.

Ella was to be seen in Nairobi at the end of December 2007, two months after returning home.  However, her family cancelled travel plans when violence gripped Kenya following the December elections.

Our Nairobi team was in regular contact with Ella’s parents during this time, and eventually convinced them that travel was safe and delaying follow up could put their daughter at risk.  We recommended follow-up with the retinoblastoma specialist at Kenyatta National Hospital (KNH), but Rosalie preferred to see the doctor who had previously examined Ella.

On 14 March 2008, Ella had her first exam since leaving London.  She had lost all sight in the five months since returning home.  Doctors discovered a thick cataract and proposed its immediate surgical removal.  This is not recommended so soon after Rb treatment, because any remaining cancer cells may spread outside the eye during surgery, seriously risking the child’s life.

Brian Ouma, Chief Executive of Daisy Fund Kenya (now the Kenya Childhood Cancer Trust), vigorously encouraged Rosalie to obtain a second opinion from the retinoblastoma team at KNH, which she agreed to the following week.  However, cataract, tumour remnants and lack of drawings or photographs from previous exams made evaluation very difficult.

Dr. Kahaki Kimani, Director of the KNH Rb Program, consulted with Brenda Gallie, DECF Medical Director and Director of the Rb Program at Toronto’s SickKids Hospital.  Together, they struggled to determine the best action for Ella.  Removing a stable last eye would be a tragedy, but inconsistent follow up could also be fatal if cancer had relapsed, and previous active tumour In the front of Ella’s eye caused major concern.

After much debate, Dr. Kimani and Dr. Gallie advised Rosalie that removing Ella’s eye was the only option to protect her life.  Although heartbroken, Rosalie understood the reasons, but she could not consent to the surgery without her husband’s agreement.

Ella’s father could not attend any hospital visits in London or Nairobi due to the cost and need to keep the home functioning.  He had no direct contact with Ella’s doctors before March 2008, and received no emotional support.  He was in an impossible situation, lacking information and access to people who could offer him hope and encouragement.

We linked Ella’s father and a local ophthalmologist with the French speaking director of Ophthalmology at SickKids Hospital, but communication was difficult and after six years of growing hope, the recommendation was too much to receive by email and phone alone.

Against our advice, Rosalie returned with Ella to Burundi to discuss the situation with her husband.  She did not return to Kenya, exchanging infrequent emails with international friends and our team.

Academically gifted, Ella was enrolled at a school for the blind in Uganda.  She appeared to by healthy, and her parents grew in confidence that radiotherapy had finally destroyed the cancer.  They remained hopeful that their decision to decline surgery would in time allow her to regain some sight.

On 5th May 2010, Rosalie took Ella to her local ophthalmologist, concerned about what she believed to be a growing eye infection.  The doctor could barely contain his tears as he explained that Ella had extensive relapsed cancer that could not be cured.

Our team rallied around Ella and her family, offering every support possible.  One week later, she and Rosalie returned to Nairobi for chemotherapy to give her comfort, dignity and a chance of cure.  We were shattered by her suffering.  She was a beautiful, sweet, vibrant child.  To see her pain, her family’s pain, and the way the cancer had mutilated her face, was gut wrenching and soul destroying.

Ella’s ultimate journey through retinoblastoma was a tragedy of epic proportions, after all she had gone through and her family had sacrificed over almost ten years.  She was diagnosed with cancer at just one month old.  What hope there may have been to save her sight was blotted out by poverty and many challenges of providing effective ongoing care to international patients.  Opportunities to save her life were lost in the focus to save her eye, lack of emotional support and her father’s isolation.

Our entire retinoblastoma community has many important lessons to learn from Ella, and great potential to ensure her life and her family’s great suffering creates a positive legacy for children who travel internationally for care.