You are here: Home1 / Retinoblastoma Resource2 / Through Our Eyes3 / Unilateral Rb4 / Connor (Canada)

My husband, Kevin and I reside on a farm near Assiniboia, Saskatchewan with our three children, Megan (15), Connor (13) and Jenna (8). Assiniboia is a rural community of about 2,500 people, located about two hours south west of Regina.

From four weeks old we noticed a strange reflection in Connor’s left pupil. At first we dismissed it, but as the days passed it grew more noticeable. I mentioned it at his four and six week well-baby check-ups, but the doctor said she could see nothing to worry about. 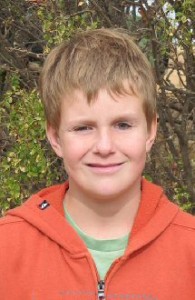 On the evening of June 1, 2000, days after Connor’s six week check-up, I looked into my precious son’s eyes, and what I saw scared me to death. In the dimly lit room, his pupils were fully dilated. His left pupil appeared almost hollow. We could see all the blood vessels at the back of the eye. It was eerie.

The next morning I phoned our family doctor in Moose Jaw. She said she’d just examined Connor, and saw nothing wrong, but I wasn’t satisfied. I phoned my optometrist in Saskatoon. He didn’t want to panic us, but based on what we told him, he felt we should have a doctor examine Connor’s eye right away. Back to Moose Jaw we went, only to be told a third time that nothing was wrong. I will forever feel guilty about not pushing harder at this point. There is no excuse, except that I so wanted to believe nothing was wrong that I accepted the doctor’s opinion. Deep down, I knew something was wrong, but not in my wildest dreams did I imagine cancer.

The following week, I was in Saskatoon on business, and asked my optometrist to squeeze Connor in for a quick exam. He was very concerned, and phoned all over Saskatoon, trying to get an ophthalmologist to see us that afternoon, but none could. An ophthalmic resident told him babies often have “different pupils”, and there was nothing to worry about; he didn’t think there was any need to see us.

We left Saskatoon on Friday, June 9, feeling that people who should know didn’t think we had anything to worry about. When we got home, Connor was very unsettled, and vomited through the night. By morning, I was again concerned about his health.

I took Connor to the hospital in Assiniboia, afraid he was dehydrated. I asked the doctor on call to look at Connor’s eye. Immediately concerned, he phoned an ophthalmologist in Moose Jaw (at home, on a Saturday), and made us an appointment for 8:00 am Monday. We never kept that appointment.

On Sunday June 11, I awoke to find Connor’s eye swollen to the size of a golf ball. After a brief stop at the hospital in Assiniboia, we were sent to an eye clinic in Regina. The torturous examination involved my holding Connor as tightly as I dared while the ophthalmologist tried to pry open his eye. A CT scan confirmed the ophthalmologist’s suspicions: Connor had retinoblastoma. The tumour filled his entire eye.

We met with the pediatric oncologist early Monday morning. She contacted Drs. Brenda Gallie and Helen Chan at Toronto’s Hospital for Sick Children, and all agreed we needed to be in Toronto immediately. A truly heroic effort by the social worker secured Kevin, Connor and I the last two seats on the 6pm flight.

Over the next few days, Connor underwent a battery of tests. The doctors were very concerned the cancer had spread outside his eye (largely because of the swelling), and prepared us to begin chemotherapy. Removal of Connor’s left eye was scheduled for Friday, June 16. I will never forget that Thursday evening – as soon as Dr. Gallie and Dr. Chan walked into our room I knew the news wasn’t good. Connor’s MRI indicated the cancer had penetrated his optic nerve: we were fighting to save his life.

Enucleation day was a roller coaster of incomparable proportions. Nothing can prepare you for that first time they take your child into surgery. You are so utterly helpless. Half way through surgery Dr. Chan gave us the best news I’ve ever heard. After removing his eye, Dr. Gallie’s cross-section analysis of Connor’s optic nerve showed the cancer had not invaded the nerve.

Connor was a very lucky boy. His doctors thought the huge tumour applied immense pressure to the optic nerve. The blood vessel feeding the eye, which runs through the nerve, eventually succumbed to this pressure, and clotted at the nerve’s base (seen on MRI), killing the tumour, and the eye. They believed the swelling of Connor’s eye was his body’s reaction to the dead tissue. Several days after surgery, the pathology report confirmed this hypothesis.

Over the next fifteen months our family made eleven trips to Toronto, three with our daughter, Megan, for routine Examinations Under Anaesthetic (EUAs). Connor continued to defy the odds, showing no sign of further tumour development. Finally, in September, 2001, we received much anticipated good news. After an exhaustive search, Dr. Gallie had located the genetic mutations that triggered Connor’s cancer. They were not present in his blood sample. Connor had non-heritable retinoblastoma. Connor and our other children had no increased risk for new tumours.

As there were no ophthalmologists in Saskatchewan familiar with retinoblastoma, we continued to make semi-annual trips to Toronto for many years. While Connor has very low risk for further cancer, I like knowing he is seen by doctors who specialize in retinoblastoma and are among the world’s best.

I’d like to say there have been no complications since Connor’s non-heritable diagnosis, but we have had some hiccups along the way. Most notably additional surgery when Connor was four. His implant became exposed, but an oculo-plastic surgeon repaired this and to date all looks well. Medically, this wasn’t too big a deal – it wasn’t cancer after all. The ordeal put a significant emotional toll on Connor though.

Connor was so young at diagnosis and through all the EUAs, that he has no memory of these events. This surgery was different. For the socket to heal fully, he had to go without his prosthetic eye for six weeks. He was in pre-school, and for the first time both he and the children around him could see he was different – he only had one eye. My normally energetic and outgoing little boy became shy and withdrawn, and routinely hid behind me in public. It took more than a year for his self-confidence to begin to rebound. The turning point came the following year.

During the last week of kindergarten, Connor’s pros-thetic eye fell out. He immediately covered his eye and ran from the room. The school phoned me to ask what they should do. I talked with Connor, and asked what he wanted to do. I saw three options: I could come pick him up; I could come and replace his eye and he could return to his class; or we could educate the class about his situation. Connor thought it might help to tell the kids about his “special eye”, so after talking to his teacher we gave it a go.

We told his class how he was born with a very sick eye and doctors had to take it out to make Connor better. We talked about a very special person called an ocularist who made an eye just for Connor. Then the kids watched as I put his eye back in. I think this was very liberating for Connor: the kids understood and accepted. Parents thanked me for the education. One mom even told me her child came home asking if he could have a special eye like Connor!

Today Connor is an energetic, healthy teenager who does all the things teenage boys do. Sports play a huge part in his life. His prosthesis is beautiful – most people are unaware his left eye is artificial. He grew up knowing that when he was born he had a sick eye, that doctors removed it to make him better and gave him a “special eye”. As he grew older, we told him more of his story, and he understands he had cancer. He has embraced who he is and isn’t afraid to share his story. He’s given talks at his school about his experience and last year was the guest speaker for our local Terry Fox Walk/Run kick-off event.

Every day I’m reminded just how special Connor is. Not a day goes by when I don’t remember how lucky we are, and how different things might have been…