You are here: Home1 / Retinoblastoma Resource2 / Through Our Eyes3 / Unilateral Rb4 / Ewan (England)

Ewan had not long turned two years old when I noticed he had a very bloodshot eye. The white seemed to have a yellow tinge but I put it down to burst blood vessels from crying.

When his Nannie came to visit, I mentioned his eye to her and she seemed quite worried. She advised me to take a flash photograph, which I did straight away. The photograph showed a big white pupil in his right eye. Mum didn’t let on about the nature of her concerns, but said I needed to take Ewan to the doctor quickly. 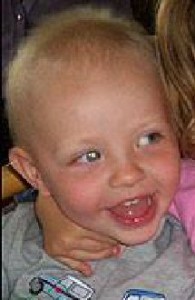 I made the appointment with our GP and took him a couple of days later, the doctor was concerned and said something didn’t look right. Because she wasn’t sure what it could be, she referred Ewan to the ophthalmologist at our local hospital.

After a long wait of seven weeks, Ewan was finally seen and the paediatric ophthalmologist said he needed to put Ewan to sleep in order to investigate properly. Fast forward to a week later and I was called into the room after the procedure to be told that something was very wrong. The doctor suspected a tumour. We had to go to The Royal London Hospital the next day.

It all happened to fast after that. The appointment in London under anaesthetic confirmed Ewan had eye cancer. Believe it or not, his dad and I were still completely unaware of retinoblastoma and I think we were in denial. Mum was worried because she had thought it was cancer all along from looking at a holiday photograph which clearly shows a white pupil.

Our little boy lost his right eye because the cancer was so aggressive and had been growing for a long time. Further tests after the enucleation showed that the cancer had spread to the outer layers of his eye and had begun to travel along his optic nerve towards his brain. So he received a course of chemotherapy to ensure any tiny cancer cell that remained was killed before it threatened his life.

Ewan was a total star throughout everything, he was scared but he was so brave and got the all clear after his last treatment just in time for Christmas. The best Christmas present ever!

Ewan is now a happy, healthy boy. Although he has had a hard time getting used to his prosthetic eye, he has come a very long way and we are all so proud of him. He doesn’t let it hold him back. He’s our hero.