You are here: Home1 / Retinoblastoma Resource2 / Through Our Eyes3 / Bilateral Rb4 / Brady (USA)

Brady was born on 30 May 2005. He appeared to be a happy healthy infant, but I repeatedly expressed concerns that he was looking up frequently, unable to focus and had a lazy left eye.  The pediatrician told me not to worry, that infants typically don’t focus until 4 months.

About 2 weeks after Brady’s 2 month well check, I noticed his pupils appeared white in certain lighting.  On Friday, 27 August 2005, his pediatrician finally referred him to a pediatric ophthalmologist, who diagnosed cancer in both eyes. 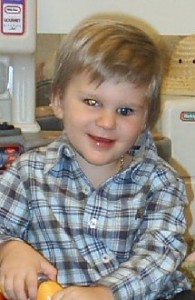 At Bascom Palmer Eye Institute in Miami, Dr. Timothy Murray said Brady’s was the worst case he had seen in a decade. 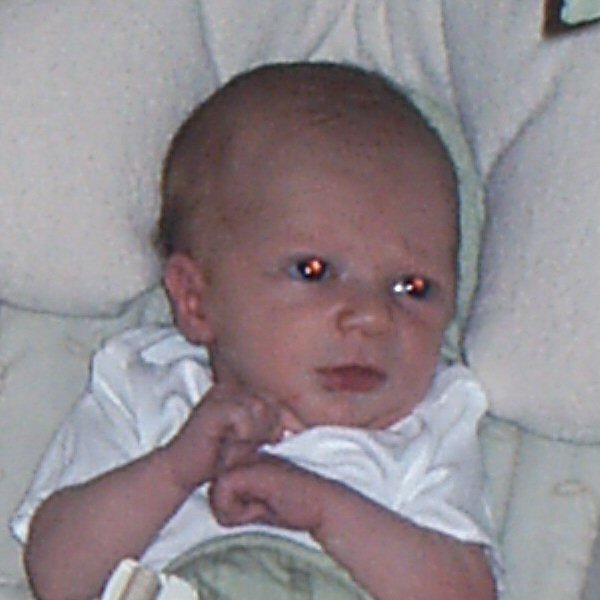 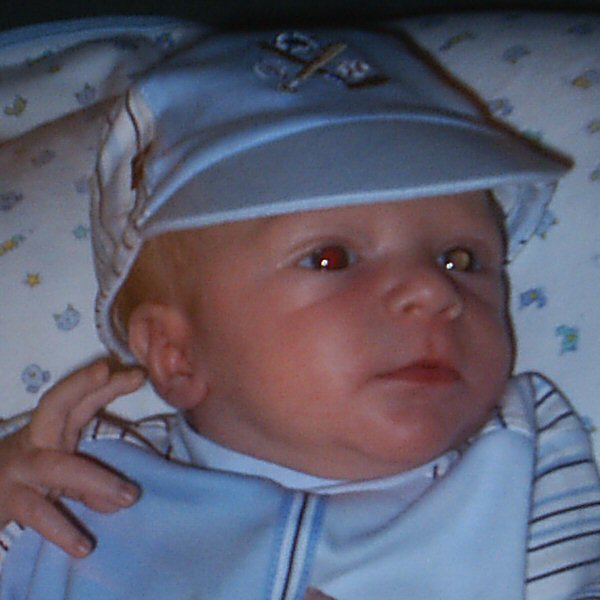 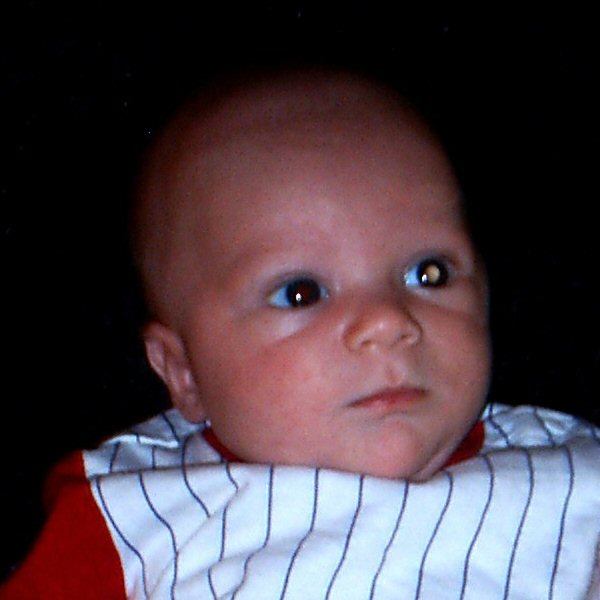 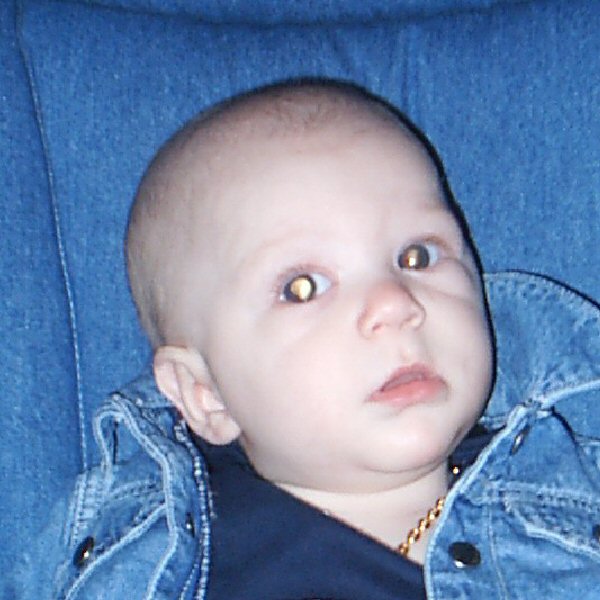 88 days old – the day before diagnosis

Brady began treatment immediately.  He had surgery to implant a port-a-cath which would be essential for his chemotherapy.  His regimen of treatment consisted of nine cycles of laser treatment combined with chemotherapy.

Brady spent his first Christmas in hospital, receiving chemotherapy.  He had a rough time with high fevers and low blood counts.  After the fourth cycle, daily G-CSF injections dramatically improved his ability to tolerate the drugs, but he still had a difficult time with sickness and sinusitis during the last five cycles.

Chemotherapy ended on April 23 2006, and the next EUA found stable tumors.  Eight months of intensive chemotherapy had slowed Brady’s development, but once treatment ended, he began to progress again. Jeff and I had hope for the future.

However, at his eleventh EUA in June, Dr Murray found tumor activity in both eyes.  Aggressive laser controlled them for three months, but at his fifteenth EUA in September 2006, both eyes were filled with seeds too numerous to count.

Brady began external beam radiation on September 21st, just over a year after diagnosis.  He was admitted to hospital after only a week, continuing daily radiation while also receiving high dose antibiotics to fight a staph infection.  At the next EUA, Dr. Murray said his response to treatment was “phenomenal” – no active cancer.  Jeff and I were elated, and prepared for the holidays with lighter hearts.

The joy was short-lived however.  Brady’s EUA on 5th January 2007 revealed an extensive relapse in both eyes.  Dr Murray injected carboplatin chemotherapy into the tissues surrounding both eyes, and advised a repeat course of chemotherapy begin the following Monday.  Brady’s oncologist at Jackson Memorial Hospital matter-of-factly stated “if you do additional chemotherapy and it works, it will be a miracle”.

Just a week before this devastating news, I connected with retinoblastoma survivor Abby White, through the Daisy’s Eye Cancer Fund (now WE C Hope) website she maintained from her home in Oxford, England.  On the Sunday after Brady’s relapse, I called Abby with the news. She was concerned about the potential for the planned chemotherapy to be effective when it had already failed once for Brady.

Abby recommended I talk urgently with Prof. Brenda Gallie, head of the retinoblastoma program at Toronto’s Sick Kids Hospital, and co-founder of WE C Hope.  Through researching treatment options, I had already learned of Prof. Gallie and her experience with recurrent retinoblastoma.  Abby arranged for her to call me that evening.

Prof. Gallie advised that Brady not be admitted for chemotherapy the following day.  She explained that, while the planned chemotherapy involved the same four drugs as the Toronto Protocol, the doses are higher and given over a shorter time in Toronto.  The Toronto Protocol has produced excellent results for many children with advanced intra-ocular retinoblastoma like Brady’s, and would significantly increase the chance of saving his eyes.

Over the next few days, the doctors in Toronto and Miami talked over the options.  Everyone expressed concern about Brady travelling to Toronto for chemotherapy.  We’d be leaving our home, family and support system for up-to 6 months, as traveling back and forth would not be a good idea for a child with compromised immunity.  But our Miami doctors agreed the Toronto Protocol provided the best chance to save one or both of Brady’s eyes.  They ultimately agreed to accept guidance from the Toronto team, while administering the Toronto Protocol in Miami.

The Toronto Protocol is a strict regimen of pre-meds, three chemotherapy drugs, the antibiotic Cyclosporine A, fluids and supportive medications to reduce side effects.  This was a new, testing experience for the doctors and nurses in Miami, but they worked patiently, consistently and effectively with colleagues in Toronto to ensure optimal care for Brady.

Brady completed the Toronto Protocol on April 1st 2007.  His first EUA after this showed no active tumor, but the previous relapses put nerves on edge.  Dr Murray advised us about a new therapy being tested in New York, and we decided to go there to discuss the possibility in the event of further relapse.

Brady was seen by Dr David Abramson in New York on May 29th, the day before his second birthday.  After a short EUA, the doctors concluded he was not a candidate for intra-arterial chemotherapy.  Moreover, an ERG test revealed no signal from either retina to his brain. Brady’s 2nd birthday passed in a fog of despair, as we returned to Florida, devastated by the news that Brady was apparently completely and irrevocably blind.  We always believed he had some vision worth saving.

After a very dark week, we were again given hope. Dr Murray told us Brady’s retinas were detached at the time of the EUA in New York, causing the flat ERG result.  But they had detached and reattached before, so the possibility for vision continued.  At an EUA in Miami one week later on June 15th, Brady’s eyes were stable, with no active tumor and no increased bleeding.

Dr Murray had never seen such bleeding in a child with retinoblastoma, and he requested that Prof. Gallie see Brady in Toronto before the next scheduled EUA on July 20th.  As Prof. Gallie has treated a number of international children following extensive therapy outside Canada, she has more experience with ocular-hemorrhage.  She and Dr. Murray discussed Brady’s case while together at the International Society of Ocular Oncology conference in Sienna, Italy during those intervening weeks, as we prepared for the long trip to Toronto on July 6th.

Abby White visited us at the end of June,   She brought with her a small clear, completely silent ball, which lights up with many different vibrant colors.  As she moved the glowing ball around the circumference of Brady’s head, he reached for it when it was held on the far RIGHT side of his right eye.  He grabbed the ball every time, and found it on the floor without scanning for it with his hands.  This very clearly showed us that Brady could see.

Prof. Gallie found no new or recurrent tumor activity in either eye, and felt some further vision might be recovered in his right eye.  However, she explained that bleeding and distorted anatomy in his left eye would challenge future evaluation of tumor activity.  It appeared that enucleation of the left eye would be in Brady’s best interests.

This wasn’t the best news, but it certainly wasn’t the worst.  I was almost prepared to hear it.  I think the good news about the right eye balanced things.  We still had a victory – we saved one eye!!

Brady’s left eye was removed without complication on Tuesday 6th August 2007.  He has made remarkable progress since then, as if his body knew the sicker part of him was gone.

Brady has been cancer free since completing the Toronto Protocol on 1st April 2007.  His right eye has only improved, and the blood completely resolved within six months.  The future is looking very bright.

Brady has developmental delays and sensory issues because of all the treatment and hospitalizations, but has made exceptional progress since ending treatment.  He is also doing very well in school

Brady’s unique story shows how all parties involved – parents, friends and physicians – came together to form one vital team that not only ensured my child had the best care, but also enabled this care to be received close to home.  Dr. Murray, Dr. Gallie and Abby are our heroes.  Thank you just isn’t enough.

Never underestimate the importance of networking, friendship and support.  Always ask questions, never give up and always have faith.  If you don’t like the answers you hear, don’t be afraid to look outside the box and try something new or different.  When you are faced with life-changing decisions for your children, you may only have one chance.

Photos still show a white glow in Brady’s eye, but we know this is just a reflection of the dead, calcified tumors that remain.  In a way we like to see this glow – it tells the story of Brady’s survival, and the wonderful outcome he has had, against all the odds.