You are here: Home1 / Retinoblastoma Resource2 / Through Our Eyes3 / Extraocular Rb4 / Ernest (Kenya)

Ernest and his twin sister Teresa were born in Migori, Western Kenya, on May 18, 2005, Like his sister, Ernest weighed a healthy 3.4Kg. Their first year was unremarkable, and their parents relished the joy of two happy, apparently healthy babies.

In July 2006, when Ernest was 14 months old, his mother, Perez, noticed a whitish reflection in his left eye. She immediately began seeking medical help from local hospitals and chemists, but no one could find a cause for the strange white pupil. 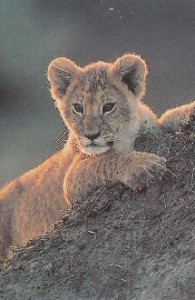 In October 2006, Ernest’s left eye began swelling rapidly. The swelling became so extreme, it changed the shape of his right eye. Doctors at Migori’s Akidiva Memorial Hospital referred Ernest to the neighboring Ombo Mission Hospital for an eye exam. The hospital’s only ophthalmologist could not make a diagnosis, and prescribed gentamicine eye ointment.

For a year, ointment was applied to the eye, apparently helping to reduce the swelling. However, in September 2007, Ernest’s right eye also began to itch and swell, and he eventually lost all his vision.

By this time, Immediate family and community members were convinced Ernest had been bewitched by a local woman. The woman had settled with Perez’ husband, who feared the appearance of his son’s bulging eyes. So Perez looked to traditional Jolemo healers, while continuing to search for help among conventional doctors.

At this time, I worked with a local NGO for orphans and vulnerable children, which Perez turned to for help I and my colleagues supported the family and wider community in a diligent search for qualified specialist medical care.

Through these efforts, we were able to convince the family and community that Ernest’s condition had nothing to do with witchcraft.   He returned to Migori District Hospital in September 2007, where the possibility of eye cancer was raised for the first time. Ernest was referred to Nyanza Provincial General Hospital in Kisumu for specialist evaluation.

Sadly, Perez did not pursue this referral as she had no funds even for food and could not afford to buy a bus ticket. Despite appeals from myself and Perez to the community, no help was received due to deep poverty in the area.

Four weeks later, Ernest’s pain was excruciating and he could not eat. Seeing his plight spurred me to do all within my means and ability to ensure he received medical attention. I prayed that, by the Grace of Almighty God, he would live to become one of the leading crusaders for childhood eye cancer in Kenya.

On 19th November 2007, I took Ernest and his mother to Kenyatta National Hospital in Nairobi where he was admitted to the retinoblastoma ward. A CT scan confirmed bilateral retinoblastoma, and 10 days after admission, Ernest received his first chemotherapy. Within only six days, both eyes had returned close to their normal size.

Ernest was discharged on December 12th, to return in 3 weeks for his second cycle pf chemotherapy, after which both eyes would be surgically removed. Unfortunately, Kenya was in chaos in January 2008, as post-election unrest paralyzed transport systems.

I too was not spared the chaos. My shop in Migori – my family’s only source of income – was looted by rioting youths, and by the time peace returned at the end of February, my hopes of providing immediate financial support to Ernest were dashed.

My wife and I continued to set aside funds for Ernest but they were limited. On 17th July 2008, he was readmitted to Kenyatta National Hospital. Surgery to remove his eyes was scheduled for July 20th, to be followed more chemotherapy. Unfortunately, Ernest did not undergo the surgery or chemotherapy as neither his mother nor I could afford the KSh 8,000 ($100) cost.

During one visit to the hospital in October 2008, I saw a flyer about Daisy’s Eye Cancer Fund on the ward. I contacted the organization’s Nairobi office requesting emotional and financial support for the little boy.

Brian Ouma, Director of DECF-Kenya (now part of the Kenya Childhood Cancer Trust), visited Ernest and his mother at the hospital. He consulted with the medical team, who confirmed our fears that Ernest’s cancer was now too advanced to be cured. Any surgery and chemotherapy would be palliative, and the priority for his care at this stage was quality of life. Brian liaised with services across the country, and secured free admission for Ernest to the newly opened St Catherine’s Hospice in Kisumu, Kenya’s only exclusively paediatric hospice.

Sadly, before this process was complete, Ernest died suddenly on 26th October at Kenyatta National Hospital. His sad story ended with his burial four days later at Langata cemetery in Nairobi – his family could not afford to transport his body home to Migori.

One may not believe the very primitive beliefs pegged on blind children in rural Kenyan communities. Perez has seen it all, heard it all and felt all the humiliation and isolation of this situation. She was abandoned by her husband and mother because of the way the cancer disfigured and blinded Ernest, because of the stigma associated with removing eyes and because of the financial burdens his care placed on the impoverished family.

Following Ernest’s death, his father demanded a reunion with his wife, Perez. He now saw her as free from the burden of a blind child, Due to extreme poverty, Perez returned to her husband, but in a final tragic twist to her story, she felt compelled to leave Ernest’s twin sister, Tereza, with her grandmother. She and her husband feared that Tereza may also develop retinoblastoma and she had no emotional strength to face this possibility.

My great wish and prayer is slowly being answered – awareness campaigns created through our Kenyan National Rb Strategy are bringing knowledge and understanding to the ordinary “wananchi” of Kenya. Medical training and specialist care are improving and family support initiatives are beginning to overcome the barriers that prevent families accepting treatment.

Retinoblastoma stole Ernest’s life and the fear it created left his twin sister without the presence of loving parents. The combination of poverty and retinoblastoma in Kenya is devastating. Tragedies like these can be prevented. My humble appeal is that the world should not forget the urgent needs of children and their families affected by Rb in Africa. As a national and global community, we must do everything in our power to reduce the chance of death from retinoblastoma, especially among poorer families who currently struggle to find help and are unable to support vital life-saving treatment to its conclusion.

Ernest’s cancer was so advanced by the time he reached specialist care, we cannot share his photograph. He was a little lion cub with great courage.