You are here: Home1 / Retinoblastoma Resource2 / Through Our Eyes3 / Bilateral Rb4 / Aidan (Canada)

Aidan was born on June 2nd, 2002. A healthy baby boy…the light of my life. Thoughts of illness never crossed my mind, especially not cancer. He was eating, growing, sleeping through the night, and all in all seemed the epitome of health.

When Aidan was about 3 months old, his left eye began turning in, and his right eye would momentarily quiver. The doctor told me he may have a lazy eye, but this could be corrected when he was older. 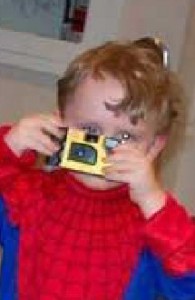 Aidan became more distant. He would stare for ages at lights and rip tissue paper into tiny pieces. He never touched my face, never reached for toys or anything else, and never laughed.

By the time Aidan was 6 months old, I was convinced he had autism. I told my Uncle Wayne, who replied “I don’t think he is Autistic, I think he is blind.” This hit me like a truck…the thought had never crossed my mind, but it made perfect sense. I made an appointment with an ophthalmologist right away.

The Ophthalmologist examined Aidan’s eyes, without dilating the pupil or checking his retinas. He said Aidan had a lazy eye that could be corrected when he was older. He then left the room very quickly…we were dismissed.

I needed a second opinion. There was a 2 month wait, but I was assured the exam would be thorough when the time came.

The next 2 months were difficult. Aidan still made no attempt to play with toys, touch my face, or even make eye contact – I was convinced he was autistic. Finally the day of the appointment came, March 27th, 2003.

The Ophthalmologist dilated Aidan’s pupils, took a look, and then a deep breath. “Miss Lapp, I am not a specialist, but I believe your son has bilateral retinoblastoma, a childhood cancer of the eyes. I am making you an appointment for first thing tomorrow morning with Dr. Grieves, he will perform an EUA to be sure. If Aidan does have RB, you will need to take him to The Hospital For Sick Children in Toronto ASAP.”

Bilateral retinoblastoma? EUA? Cancer? Toronto? Suddenly I was in a different country with no clue of the language.

The next morning we went to Royal Alexandria Hospital, here in Edmonton, to meet Dr. Grieves – the man who would give us the most devastating news of our lives. My 10 month old son indeed had bilateral retinoblastoma.

I barely remember the next 24 hours. There was a lot of crying, internet searches, phone calls… Then we were in Toronto.

We met with Dr. Heon initially, who explained the cancer, treatment, and how they always focus on saving life before saving the eyes. She informed me Aidan could lose both his eyes due to the magnitude of his cancer, but they would do everything necessary to save his life.

Dr Heon told me Aidan must begin chemotherapy the following morning. I then met Dr. Chan, Aidan’s oncologist. What she explained was incredibly foreign and terrifying, but I knew it was the only option. I put all my trust in this team of doctors…they would save Aidan’s life.

After only 2 rounds of chemo, Aidan developed his first bits of sight. His doctors were very happy with the amount his tumors had shrunk. They could see his optic nerves, when just a month before they couldn’t. Seeing Aidan sick, bruised and losing his hair was killing me, but hearing the treatment was working made everything worth it.

Over four years, Aidan had a total of 14 rounds of chemo, countless cryotherapy and laser treatments, and a radiation plaque in both eyes, He had brief periods without treatment before his tumors started growing again.

We travelled from Edmonton to Toronto every 17 days for nearly 5 years. In that time we stayed/lived at Toronto’s Ronald MacDonald House where we made more than friends…we made family. Aidan had many chemo days with Daisy Lloyd, WE C Hope’s inspiration, whose family lived at RMH Toronto.

Chemo became a part of life. Aidan began looking forward to our visits to Toronto so he could see all of his friends and “family”. I cannot imagine what this journey would have been like without them.

Aidan’s longest remission was 4 months, September 2005 until January 2006. When I awoke on Wednesday January 4th, somehow, I knew. He was in the operating room much longer than in the past 4 months, and our social worker sat with us for much longer than usual…my fears grew.

When the doctors asked me to join them in a private room, I burst into tears. Not again! My intuition was right – again, but this time Aidan couldn’t have any more chemotherapy. His right eye, in which he had most sight, had to be enucleated. My world crumbled.

Aidan’s right eye was removed on Monday January 9th, 2006. Like his first diagnosis, that day is a blur. I remember feeling the floor falling and rising under me throughout the day. I remember wandering aimlessly, not knowing what to do. I remember going into the recovery room to see my boy, bandaged and bruised. I remember people talking to me, seeing their lips move, but I don’t remember anything they said. I can’t even remember how I felt.

Aidan has been cancer free since enucleation. For the first year after surgery, we travelled to Toronto monthly for EUA’s, then every 3 months and later every 6 months. From 2010, we have only gone once a year. Aidan’s sight will always be very poor, but he is alive, healthy and thriving.

Looking back, I am in awe of Aidan’s strength, compassion and ability to never let any of this be an adversity. He truly is my hero…and the entire Rb team in Toronto, the people who run RMH Toronto, and all the friends he fought this battle alongside, are his heroes.

I cannot stress enough to parents to trust your intuition. If you think something is wrong, chances are something is wrong. When Aidan was a baby, we didn’t have a camera. In the few photos I have, leukocoria is visible, but I never noticed because it was present in both eyes. I urge all parents to take millions of photos of your children and check for white pupils. It could save your child’s life.