Several chemotherapy drugs are used in combination to treat retinoblastoma.

A regimen is a specific plan detailing chemotherapy drugs and doses to be used. Regimens are often identified by acronyms of the drugs used.

A protocol describes a complete schedule of tests, procedures, chemotherapy and supportive medications (including doses), used in a research study or clinical trial. 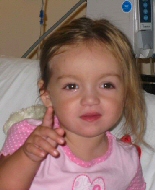 You have the right to ask for a copy of your child’s complete regimen. You should be given a copy of the complete protocol before signing consent to enrol your child in a clinical trial.

More information about the Protocol Document

Doses of chemotherapy are usually based on your child’s weight or body surface area (BSA – calculated from weight and height and measured in meters squared (M2).  Height and/or weight may be measured before each cycle, so doses may vary throughout treatment.

Often referred to as VEC, CEV or JOE, this is the most common combination of chemotherapy drugs for retinoblastoma. Many hospitals worldwide use this combination, but regimens and protocols vary widely.

Doses, timing and number of cycles, supportive medication, timing of focal therapy, and use of additional therapies (e.g. radiotherapy) differ. Ask your child’s doctor for a full explanation of the treatment plan, and a copy of the regimen or protocol.

Retinoblastoma cells are coated with a protein called P-gylcoprotein (p-gp).  Acting like a bodyguard, p-gp pumps out substances it recognizes as toxic.  So chemotherapy drugs are pumped out before they can work. This phenomenon is known as drug resistance.

To combat p-glycoprotein, some doctors give chemotherapy drugs between two doses of a ‘decoy’ drug, Cyclosporine A (CSA) in a treatment called the Toronto Protocol. CSA is an immunosuppressant, usually given after transplant to prevent rejection.

CSA disrupts the protein pump when given in short, high doses immediately before and after VEC chemotherapy. The drugs therefore mount a more sustained attack on retinoblastoma.

Several centres use CSA in lower doses over a longer time period, but it is not yet clear how effective this is.

Questions to Ask the Doctor