You are here: Home1 / Retinoblastoma Resource2 / Through Our Eyes3 / Unilateral Rb4 / Linda (Kenya)

Linda was born in Western Kenya in Spring 2004.  Her parents first noticed a reflection in her left eye when she was around 15 months old.  They became increasingly alarmed as the white glow grew larger and brighter, but with 5 other children to care for, they could not afford to visit a doctor.

They sought assistance from a herbalist, who instructed them to nightly hold their hands up before the affected eye, repeating “bad thing go away” three times. 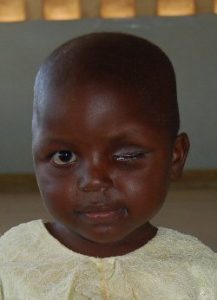 After several weeks of attempting this, Linda was taken back to the herbalist, who gave her parents herbs to place on the eye during their nightly ritual.

When the herbs also had no effect, Linda’s family began gathering the money required to pay for examination by a doctor.  Doctors at the local district hospital told her parents she had an infection.  They treated her for three months with various antibiotics.

Linda was eventually referred to New Nyanza Provincial General Hospital, but one month passed before her family had sufficient funds for travel and doctor fees.  She was seen by a general doctor, who diagnosed orbital cellulitis and treated her for several weeks before finally referring her to an ophthalmologist at the same hospital.  Unilateral retinoblastoma was immediately diagnosed.

Doctors told Linda’s parents the cancer was a major threat to her life, and she would die without immediate surgery to remove her eye.  Though devastated and overwhelmed by the revelation, her parents agreed to allow surgery that same afternoon.

We met Linda in November 2006, when her parents graciously invited us to visit their home.  Five months after her surgery, no pathology report has been issued.  This was not surprising as just one pathologist served the entire hospital.  Doctors had no knowledge of whether Linda’s cancer had spread to the outer layers of her eye or optic nerve.

As the cancer had filled her eye and the doctors were not willing to risk under-treating her, Linda began weekly chemotherapy.  Dr. Juliana Otieno, the paediatrician caring for children with cancer, hoped any unseen tumour spread would be killed before it had chance to grow.

Linda received a combination of adramycin, vincristine, methatrexate and cyclophosphomide.  These were the only chemotherapy drugs available, used to treat endemic Burkitt’s lymphoma.  The drugs were provided free of charge through the generous support of a local couple, who import the drugs from India, donating them to needy children at the hospital.

However, the donors constantly struggled to meet demand with their own funds.  Linda and her parents often arrived at the clinic for treatment to find only one or two of the drugs were available.  Antibiotics and nutritional supplements were provided by the East Africa Children’s Fund, set up to support children with Burkitt’s lymphoma.

Despite free medications, the burdens for Linda’s family were great.  Her siblings were removed from school to save money.  Though primary education is free in Kenya, school uniforms, books and other materials must still be purchased.  These are expenses Linda’s family could no longer afford during weekly treatments.

Linda’s father earned less than US$2.50 per day.  A round-trip bus ticket to the hospital cost US$5, and an overnight admission cost $2.85, not to mention hotel accommodation for her parents.  Extra cleaning products were needed to protect Linda from infection while her immune system was compromised by chemotherapy.  Some weeks there was not enough money to travel, and Linda missed her treatment.

At the time we met Linda’s family, they were among 44% of Kenya’s population who did not have access to good sanitation.  This and lack of access to safe water dramatically undermines the survival of children receiving chemotherapy.  The long walk in high heat to collect clean water from a safe well was a daily challenge for Linda’s family, as they tried desperately to care for their daughter and follow all Dr. Juliana’s instructions.

Like the majority of African children who lose eyes to retinoblastoma, Linda did not have an artificial eye when we met her.  Although artificial eyes can cost as little as US$60 in Kenya, this is far beyond the financial means of most people.

Children in the village became afraid of Linda because she had no eye.  They refused to play with her and she became quiet and withdrawn.  Though many people in the community were supportive of her family, some accused them of having a cursed child.

When we visited Linda’s family, her entire village came to hear about retinoblastoma.  Abby removed her own artificial eye for the duration of our visit, to show Linda she was not alone.  We wanted to help the community understand that Linda was still a whole person, that even with only one eye she could still be a successful active member of society.

We were delighted by the response of everyone we met in the village.  They all wanted to know more, and to help raise awareness to save children’s lives.

New Year 2007 brought great optimism.  Linda’s treatment would soon end, there were no signs of any cancer, and we were in the process of arranging an artificial eye.  In mid-January, however, Linda fell ill, with a high fever.  A blood test quickly revealed she had malaria.  She was admitted to Nyanza Provincial Hospital for treatment, where Dr. Juliana and Nurse Roselyn cared for her diligently.

After months of chemotherapy, Linda’s weakened immune system could not fight the infection.  Despite very good care, she continued to deteriorate.  She died on February 14th 2007, the day of love.

We were together in Canada on that Wednesday morning, working on the report of our Kenya visit.  Linda was the first child with retinoblastoma who we met together in Kenya.  We both held her in our arms and were humbled by her family’s welcome.

Linda’s experience sums up all the challenges to effective care for children with eye cancer in Africa.  Special memories of time shared with her and her beautiful family and community guide us forward to do all we can to end such tragedies.