You are here: Home1 / Retinoblastoma Resource2 / Through Our Eyes3 / Bilateral Rb4 / Angie, Kieran and Cameron (UK)

I was diagnosed with bilateral retinoblastoma at the age of four months.  Immediately my right eye was removed and I was treated with a radioactive plaque to my left.  Two weeks in hospital and I was “cured”.

I had the usual EUAs over the following years, but really the cancer didn’t impact on my life to any greater extent than something that happened to me when I was a baby.

Growing up, I knew that having a family was top priority and being a mum was really the only job description I wanted. 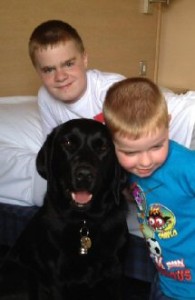 I had been told that I had a 2% chance of passing the retinoblastoma on to any children I might have, and that when I decided to start a family, I should contact a genetic counsellor.

When the time came for me to start my family it came as a huge shock to learn that I had a 50% chance of passing the gene mutation on, but it didn’t really alter my decision to have a baby.  Kieran came along 9 months later and I had his cord blood tested.  He tested positive for the gene mutation and my world fell apart.  I went from a position where this cancer held no significance in my life whatsoever, to a place where it controlled and manipulated every thought and decision.

Kieran went through 12 cycles of chemotherapy in a year, 20 sessions of radiotherapy and numerous cryotherapy and laser treatments. By the age of four he’d had 50 general anaesthetics.  During this time Kieran had to be the focus of my emotions, energies and time.  There was room for nobody else; he needed everything I could give him to just get through the treatments.

After treatment he was physically strong and healthy but he was very delayed socially and extremely unstable emotionally.  He needed a lot of one to one support and patience and it took many years to get him to a position where he could hold his own at school, or in unfamiliar situations.  Having another child with cancer would have taken me away from him at a time when he still needed me so much and it was this fact that played a large part in my decision about having more children.

Deciding to have Kieran was easy.  Even with a 50% chance of passing on the cancer, I believed that treatment was easy and quick.  Deciding to have another child became a nightmare in which I would go round and round in circles and never find a way out.  There were, however, two certainties for me.  Firstly, not having another baby wasn’t an option and secondly, my next child couldn’t have this cancer.

I spoke with Dr Rosser (genetic counsellor) when Kieran had been clear for 4-5 months and she mentioned the option of a new IVF treatment.  I jumped on this idea and was very excited when she contacted University College Hospital (UCH) in London to see if they would talk with me about it.  UCH agreed to offer me a chance with this new “treatment”.

I applied for funding from my local health authority, sure that they would approve the application.  After all, the cost of Pre-implantation Genetic Diagnosis (PGD), although high, was a fraction of treating a child with cancer.  I waited six months to be told they had turned down the application for funding with no chance to appeal.  The reason given was that I could have prenatal testing so should take that path.

I was devastated, getting more and more desperate.  After about 18 months I received a letter from the local health authority saying they had changed their minds and I now met the criteria for funding.  I was so relieved and speaking with the consultant at the hospital it looked as though treatment may be able to start in six months.  It was actually a very long two years later when they were ready to proceed with this new treatment.

In March 2006, I went down to London to start the IVF process.  I didn’t know what to expect, I was just relieved to be doing something positive at last.  Everything was going well and I was feeling very positive when I went for my first scan to see how well I was responding to the stimulating drugs.

The doctors were hoping for many follicles (each containing an egg) because this would give us the best chance of getting a few without the RB gene.  This wasn’t the case and it turned out I hadn’t responded well to the drugs.  After a few days and an increase in dosage, the hospital started talking about the possibility of there not even being enough embryos to test.  I was devastated.

By the end of the week, the number of follicles had crept up to 15 which was OK.  The eggs were collected and fertilized and three days later I was left with just six embryos ready to have a single cell removed and tested for the RB gene mutation.  Unfortunately, only two embryos were of a sufficient quality to be tested further.  I felt very down and negative, I was sure that the last four years had all been for nothing.

I felt sick and lightheaded as I went into the doctor’s office to get the results.  I just cried when they told me I had embryos which did not have the defective gene.  Finally I felt things were going my way and there might be a chance here.

The embryos were implanted on the 7th April, I had a positive pregnancy test and on the 27th November I gave birth to Cameron James.  It was wonderful knowing that the baby I was carrying didn’t have cancer; that he wouldn’t have to start chemo shortly after birth; and that he could be a normal little boy.  I had made the decision to have cord blood taken from Cameron, just as a back up really and as expected the tests came back clear.

I don’t think I would change any of the paths I took or decisions I made.  There has been a lot of hurt but so, so much joy as well.  Kieran is wonderful and now he has a gorgeous little brother to share life with.