Radiotherapy is directed by a radiation oncologist and delivered by a radiotherapist. Treatment usually takes place every weekday over a number of weeks.

Young children are usually anaesthetised for each radiotherapy treatment. However, with good child life support, children as young as 2 years can complete this treatment without sedation. 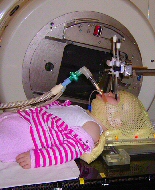 This technique uses CT scan images and specially designed computers to precisely chart a tumour in 3 dimensions. High dose radiotherapy beams are then shaped closely around the tumour.

A plastic mask is custom made for the child to keep the head completely still during treatment. Radiation beams (either photons or protons) are delivered precisely from several directions.

Planning for intensity modulated radiation therapy is very similar to conformal radiotherapy. However, the radiotherapy machine delivers beams to the tumour from many more directions, and the radiation dose can be regulated.

This lowers the dose of radiation received by healthy cells in the delivery path. However, as IMRT uses a higher total radiation dose, it may increase the risk of second primary cancers.

When this technique is used with protons, it is called Intensity Modulated Proton Therapy.

Some newer radiotherapy machines include a scanner. This enables detailed imaging of the patient immediately before or during an individual treatment session.

This may be helpful because it is not possible to keep the eye completely still, even when the head is still. The scans before or during treatment show any changes in position of the tumour, and the radiotherapist can adjust the beams if necessary.

This approach is called 4D as it uses 3D imaging and the additional dimension of time.

Advanced image-guided techniques are used to deliver a precise dose of radiation to a small, well-defined tumour. Stereotactic radiotherapy (SRT) targets cancer very precisely with many more beams from more angles than other types of radiotherapy. Doses are also higher than are used in other types of external beam radiotherapy.

Each beam delivers a small dose of radiotherapy. This means the tumour is targeted with a very high dose of radiation, while surrounding healthy tissue receives a lower dose.

Proton Beam Radiation Therapy (PBRT) uses large, positively charged particles that are heavier than normal photons used in EBRT.  These are generated within a large machine called a cyclotron or synchrotron.

Protons gather energy as they slow down on their journey through the body, and release it when they reach their target. This means they deliver a higher dose of radiation to the cancer, while surrounding healthy tissue is theoretically less exposed.

No study has yet shown proton beam radiation to be better than photon beam techniques in terms of cancer control or side effects. PBRT has only been used in retinoblastoma care since 2001. As second cancers associated with radiotherapy for retinoblastoma often do not emerge until decades after treatment, it is too early to know whether the risks of second primary cancers are genuinely reduced with proton beam radiation.

Cyclotrons are significantly more expensive than equipment used with EBRT, and still in development.  So this treatment is available at only a few research centres around the world, not all of which treat retinoblastoma,

When Radiotherapy Is Used

Radiotherapy is used to treat retinoblastoma when

Two techniques are used for retinoblastoma contained in the eye. Delivered through the side of the eye, lens sparing radiotherapy has less risk of damage to the whole eye, but it may miss some parts of the tumours. Whole eye radiation is needed when the eye has vitreous seeds.

Before treatment, the radiation oncologist will explain the treatment and potential side effects. You will also meet regularly during treatment. Use these meetings to ask questions and share concerns about the treatment.

The radiotherapist is a specially trained technician who operates the radiotherapy machine. This person will give you and your chid a tour of the radiation suite, position your child for treatment each day and monitor her via CCTV and intercom.

Radiation is measured in units called centigrays (cGy) or RADs (Radiatio Absorbed Dose). The dose for retinoblastoma is usually between 180-200 cGy per day over a period of 4-6 weeks, giving a total dose of 3500-4600 cGy.  Dosage will depend on your child’s situation. Ask the radiation oncologist to explain this to you.

Before radiotherapy begins, a mask will be made to immobilize your child’s head during each treatment. A simulation will then be done to ensure the radiation is delivered accurately.

Learn more about the preparation process.

Each treatment takes only two or three minutes.  However, set-up may take about half an hour for whole eye radiotherapy, and a little longer for lens sparing therapy.

Learn more about the treatment process.

Children must lie very still to ensure x-rays are delivered safely.  Young children are usually given a short acting general anaesthetic during the simulation and each treatment.

As treatment progresses, children can be gently encouraged to lie still during the session, reducing the need for anaesthesia. With good child life support, children as young as 2 can complete the entire course of treatment awake.

Learn how to support your child through radiotherapy.

Radiotherapy is very effective against retinoblastoma, but it can have serious life-long implications, especially for children with retinoblastoma. Discuss the anticipated benefits and risks thoroughly with your child’s doctors.

Learn more about the side effects of external beam radiotherapy for retinoblastoma.