You are here: Home1 / Retinoblastoma Resource2 / Through Our Eyes3 / Extraocular Rb4 / Sera (Fiji)

Sera’s Story – told by her parents Mela and Inoke, with Abby White.

Sera was born in June 2003, the second youngest of five children. For two years, she thrived and delighted her family, but towards the end of 2005, her parents began to notice a concerning glow in her eyes.

On Christmas Eve 2005, Sera had a red reflex eye exam at Asgar Opticals.  The optician immediately detected a potentially serious white reflex in her left eye and urgently referred Sera to an ophthalmologist, requesting that she be seen that day. 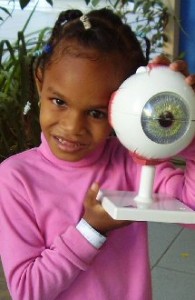 When they saw the ophthalmologist just a short time later, Inoke and Mela were horrified to learn Sera had cancer in both eyes. Her diagnosis of bilateral retinoblastoma was the first in Fiji for 10 years, and removal of both her eyes was the only curative treatment available. The news was doubly devastating as the world celebrated Christmas.

Treatment was estimated to cost AUD$40,000, of which the Fijian Ministry of Health agreed to pay 67.5%. Sera’s family needed to find $13,000, plus the cost of passports, visas, airfare and daily living expenses for up-to one year.

Sacrificing his superannuation (pension) was Inoke’s only option to fund his daughter’s care. As an engineer with reasonable job security, he was fortunate to have even this option.

Sera and Mela arrived in Melbourne on February 26th 2006. They stayed with friends before moving to the Ronald McDonald House near the children’s hospital.

Sera’s left eye was immediately removed to protect her life. Unfortunately, the pathology and subsequent tests revealed cancer had already spread to her bone marrow. This was a huge blow to Mela, and very hard to bare alone.

The intensive therapy Sera now required would cost significantly more – money Sera’s family did not have. Mela was determined to stay positive – they had made it to Australia and hope that Sera’s life and some sight could be saved.

After four cycles of chemotherapy, Sera received high dose chemotherapy and a stem cell transplant that regenerated her bone marrow. During isolation in “the bat cave” while Sera’s immune system recovered, Mela gained strength from knowing the hospital had secured funds to help meet the transplant costs.

Sera also received laser, cryotherapy and eventually four weeks of external beam radiotherapy to her right eye. She was released from the hospital’s care in September, just two months after transplant and two weeks after the last radiotherapy treatment. Mela was provided with discharge summaries to present to a doctor in Fiji. No follow up schedule was proposed, and no communication was made directly between the doctors in Australia and Fiji.

Children with retinoblastoma require close follow up to ensure new tumour activity is detected and treated early. Unfortunately, Sera’s family could find no ophthalmologist willing to follow her locally. None had cared for a child who had undergone eye-salvage treatment, let alone bone marrow transplant, and the doctor who diagnosed Sera had since emigrated.

The costs incurred in Melbourne remained a heavy burden, and Sera’s family could not fund a return trip until May 2007. The EUA found Sera’s right eye was stable, and a further EUA in Melbourne was planned for October 2008. However, no plan was made for reviews in Fiji during the intervening 18 months.

Sera’s EUA in May 2007 cost AUD$4,000, and her family was unable to clear the bill. In August 2008, RCHM informed Sera’s parents that international patients would not be accepted for the foreseeable future due to pressure on resources. At that point, the family contacted Daisy’s Eye Cancer Fund (now World Eye Cancer Hope) for help.

In March 2009, Abby had a chance meeting with Richard Le Mesurier, Vision2020 Chair for the Western Pacific. She learned a new ophthalmologist had recently become director of the Pacific Eye Institute in Suva (the capital city). Dr John Szetu had some experience of retinoblastoma through his training in Australia, and could follow Sera locally. Abby immediately connected Dr Gole with Dr Szetu, who agreed to follow Sera in Fiji.

Nerves were frayed as Sera’s exam approached. Her last EUA had been 24 months before, with no clinic exam in the interim – a situation no retinoblastoma specialist would recommend. Miraculously, no active tumour was found in her right eye, and her left eye socket looked healthy. Dr. Gole applied laser to create a landmark to aid examination in Fiji. He sent a complete EUA report to Dr Szetu, and the two doctors agreed to consult on all future examinations.

Eye examinations in Fiji are not easy for Sera’s family as Suva is a hot 6 hour coach ride away, and they have no hospitality like the Ronald McDonald House. However, knowing an ophthalmologist can follow Sera in Fiji is a great relief, and dramatically reduces the financial burden.

Had Sera’s cancer relapsed, it is unlikely she would have survived due to lack of close follow up care. She is lucky beyond words to be happy and healthy today.