You are here: Home1 / Retinoblastoma Resource2 / Through Our Eyes3 / Bilateral Rb4 / Abby (USA)

Abby was diagnosed with bilateral retinoblastoma, Reese-Ellsworth Group Vb in both eyes, when she was 18 months old. By looking for white eye or leukocoria in old photos, I was able to determine that her tumors began developing in the periphery of her eyes by 11 months.

Abby showed no signs of developmental problems until the tumors invaded the area of central vision, at which point her father and I noticed that she often had an averted gaze; she would interact with us directly, but would look off to the left instead of straight on. 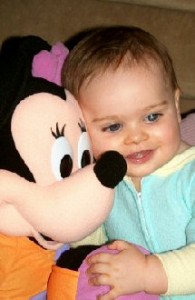 Doctors at our local children’s hospital diagnosed the retinoblastoma 2 weeks later after a CAT scan and an MRI. Because they didn’t have the expertise to treat Rb, we were referred to renowned Rb specialist, Dr. David Abramson, Chief of Ophthalmic Oncology at Memorial Sloan-Kettering Cancer Center in New York City.

Making the trip to New York was relatively easy, as we live within 2 ½ hours driving distance. Working to get approval for treatment from our insurance company, however, was anything but easy. At the time, we had an HMO which restricted our access to doctors within the insurance company’s network. Dr. Abramson and his experienced team were outside the network and the insurance company was very reluctant to grant an exception despite the fact that both Abby’s father and I were long time employees of the insurance company! After approving our second opinion with Dr. Abramson, our case manager instructed us to see a general ophthalmologist in Boston.

We were livid! It was a Friday afternoon. We were at MSKCC with the pediatric oncologist, Dr. Ira Dunkel, being told that it was vital to begin chemotherapy immediately. The team at MSKCC was prepared to begin chemo that following Monday and suddenly we had an insurance company telling us that we would have to delay treatment.

In an act of desperation, I e-mailed the president of the health care company, explaining the gravity of the situation and the necessity of a specialist – all while we were still in New York. Within an hour, we had a telephone call from a high level medical officer authorizing all of Abby’s care, with the promise to pay the expenses as if the hospital and team were within the health care company’s network. This was a highly stressful and emotional time, but I remember thinking it was absolutely absurd for a company to be worried about its pocketbook when the life of a child was at stake.

In the 3 weeks that it took to get an official diagnosis, the tumors grew rapidly, nearly filling Abby’s eyes to capacity. She was essentially blind. Because she had some functional vision, Abby’s ophthalmic oncologist recommended using chemo reduction to first shrink the tumors. The chemo (vincristine, carboplatin, and etoposide) did an incredible job and Abby regained much of her vision after just 3 cycles.

Sadly, however, persistent vitreous seeding made it necessary for Abby to have 25 treatments of lens sparing external beam radiation. We prayed that this would be the last treatment Abby would have to endure. We were crushed when 10 weeks later, Abby’s left eye developed recurrences. She had lots or cryo and laser therapy, 2 periocular carboplatin injections and one cycle of Topotecan chemotherapy in an attempt to save the left eye. Unfortunately, persistent and diffuse seeding finally forced us against a wall, and her left eye was enucleated (surgically removed) 1 year after diagnosis.

At this same time, Abby’s right eye began to have recurrences as well. She had several cryo and laser therapy treatments and a radioactive plaque to kill the resistant tumors. All the treatment caused hemorrhaging and retinal detachment, but a final intense cryotherapy treatment killed the last recurrent tumor, and slowly Abby’s eye began to heal. Within 5 months Abby’s retina had reattached itself, and the blood was reabsorbed by her body within 10 months.

That last treatment destroyed Abby’s central vision, but she was able to retain at least some functional peripheral vision. A cataract in her remaining eye, a side effect of the radiotherapy she received, further limits her remaining vision. Abby is a Braille reader due to scarring in her area of central vision; however, she has some color perception and she has retained amazing mobility. Abby is considered legally blind, but the adaptive capabilities that she has developed leave people in awe that she has any visual limitations at all. She is truly amazing and inspiring!

Abby’s diagnosis has affected our family in ways that are both negative and positive. Abby’s brothers, Jacob and Steven, had a very difficult time initially dealing with all the time we had to spend away from them. In fact, my wonderful mother saw more of the boys than we did in the first 6 months of treatment. That was hard on everyone, but especially on Jacob, who was only 3 weeks old when Abby was diagnosed.

Abby hated to be separated from her brothers. After every treatment, the first thing she asked to do was go home and see her Stevie and Jakey. Even when she had to have radiation daily for 25 days, Monday through Friday, we made the long trip home every evening, so that we could all be together. It was certainly worth the effort, but looking back, I don’t know how we did it!

When your child is diagnosed with retinoblastoma, it feels as if you’ve been hurled onto a horrible roller coaster ride, riddled with enormous highs and lows. Unfortunately, it’s a ride from which you cannot escape – at least for a time. Eventually and with time, the hills and valleys begin to level off and while life will never be the same, a new ‘normal’ emerges.

Through it all, Abby has remained the wonderful, happy, intelligent, sweet child she’s always been, and our boys have grown to be great protectors of their sister. All three children are very close. Through this adversity we have learned that every day is a gift, not a promise, that our children are incredible, amazing, and so fantastically resilient, that there is a silver lining to every cloud, and that with faith, miracles happen.