You are here: Home1 / Retinoblastoma Resource2 / Through Our Eyes3 / Bilateral Rb4 / Libby and Ella (USA)

Libby and Ella’s Story – told by their mum, Leah

Her dark hair was about an inch and a half long, so full and fluffy. It felt like feathers. Her little legs were so skinny, her feet looked like paddles in relation!

Her newborn cry sounded like she was singing “Laa Laa” to us (which we all know means “I love you”). We couldn’t have been happier or more proud. 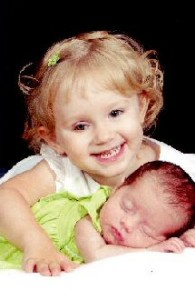 When Libby was 5 days old, she was diagnosed with bilateral retinoblastoma. We knew to have her examined because her father, Tony, had Rb as an infant and Libby had a 50% chance of inheriting the mutated gene. Her right eye had a very large tumor and her left eye had several smaller ones. She started treatment when she was 10 days old.

Libby received chemo injected behind her eye. Because she was so young, she was required to stay overnight in the hospital to monitor for apnea. After she reached 12 weeks old, the chemo and laser surgery became truly out-patient and we could take her home after a short stay in recovery.

Unfortunately, the chemo caused a retinal hemorrhage, and Libby eventually lost her right eye. Her prosthetic was custom-made and she looks just beautiful. She calls it her “special eye” and does very well with it.

On December 16, 2004, a routine MRI found Libby had trilateral retinoblastoma, a tumor growing in the pineal gland of her brain. We were told that, with treatment, we might have 3 or 4 months left with our beautiful 8 month old baby. Although we were shocked and devastated by this news, we immediately started treatment with the Pediatric Hematology/Oncology team at DeVos Children’s Hospital. The statistics were grim; Libby had a less than 2% chance to survive.

Libby had a Broviac inserted surgically into her chest to deliver drugs and take blood for analyzing cell counts. Fortunately, she responded very well to the chemotherapy, and went into remission in just a couple of months. The doctors warned us they thought they could get her into remission, but it would be very difficult to keep her there.

After 9 rounds of systemic chemo, Libby was ready for a bone marrow transplant. The doctors harvested Libby’s own bone marrow stem cells and prepared very high dose chemotherapy, hoping it would kill off any cancer cells that remained undetected by scans. We remained in a special transplant room for 34 days. Libby was very sick in response to the strong drugs, but never a day passed when she didn’t make the effort to get up and play, even if only for a very short while.

We were allowed home after her new stem cells began to replenish the bone marrow killed off by chemotherapy. Libby was very susceptible to illness because her immune system had been so weakened. She could not go anywhere or have visitors (her very careful grandparents being the exception!). We only took her to the hospital to receive many blood transfusions. We were usually there three days a week, for about eight hours a day.

Libby had to wear a mask to protect her from germs and viruses. She was only 15 months old, but did a wonderful job keeping that mask on. We spent 100 days in home isolation, waiting for Libby’s body to recover and get strong again.

When that period ended, we started on monthly spinal taps with chemotherapy injected into her spinal fluid. She had that special intrathecal chemo once a month for a year as part of a “maintenance” schedule. She finished her last chemo in July 2006 and has been cancer free since her first remission. Libby will receive follow up care for the rest of her life, but we are so grateful she is still with us and pray that she remains as happy and healthy as she is today.

On July 5th, 2006, we welcomed our second daughter, Ella, to our family. Genetic testing had determined she also, unfortunately, inherited the genetic mutation responsible for Rb. At 32 weeks gestation, a specialized ultrasound showed Ella had already developed significant tumors in both eyes. The decision was made to induce labor and deliver her early to begin treatment as soon as possible.

Ella was born at 11:45 am, 33 weeks and 5 days gestation, weighing 4 lbs 7 oz and 17 inches long. She looked like a petite version of her big sister, the only exception being a dimple in each cheek, while Libby has a dimple in her nose. She did very well for being such a little one, and required no extra help breathing or holding her temperature. It was so hard to hand her over to the NICU doctors, but we had her early to start treatment and wanted to do everything we could for her.

She had her first laser surgery at 2 days old. We were very nervous about giving Ella periocular chemotherapy but decided to try it in hopes it would save her from being subjected to systemic chemo. Unfortunately, the tumors actually grew following the chemo injection, so Ella had a broviac placed and began systemic chemo. We tried a “lighter” drug first, as Ella was still so small, but once again, the tumors grew, so we had no choice but to give her the strong combination of vincristine, etoposide and carboplatin.

We felt everything we tried before had not been in vain, as we were able to keep this very aggressive cancer from spreading until Ella could grow some and gain the strength to fight. Ella finished 6 rounds of chemo on December 22nd, 2006 but continued to struggle with active tumors and retina issues, eventually losing her left eye to the disease. Although we were sad to have her go through this surgery, with the enucleation of that eye came the end of active cancer for our little girl. She has been cancer-free since May 5, 2008.

Libby and Ella have brought immeasurable joy and inspiration to those around them and we are so proud of their beautiful hearts. With so much to be grateful for, we felt the strong desire to be a blessing to others going through a chronic illness with their child. Our family started a non-profit in 2011 called Healing with Hope and Happiness (www.healinghopehappiness.org) whose mission it is to bring joy to children while undergoing long term treatment.

We believe that good attitudes and hopeful hearts have a positive effect on those undergoing treatment. Our goal is to bring happiness to those striving for healing and to show them there is always reason to have Hope. Our organization is small; it is run by a group of family and friends that generously volunteer their time and talent out of love, but we feel that we are making a difference in our community. We know we can never repay what we’ve been given in Libby and Ella’s good health, but we’ll never stop trying.