You are here: Home1 / Retinoblastoma Resource2 / Through Our Eyes3 / Unilateral Rb4 / Rowan (USA)

I found out I was pregnant in November 2006. Almost immediately, I joined a forum on babyfit.com for moms expecting in August 2007. For 9 + months I shared stories with other moms around the globe. They were my support network and my friends.

Rowan was born a very vocal child. My husband, Marc, was a graduate student and I worked full time with the university. We had a very rough beginning as new parents – Rowan had colic, acid reflux, infant food allergies, ear infections… We were over tired parents to a little girl who did not do much but scream and cry, especially all night. 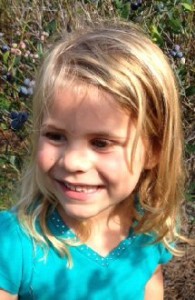 In July 2008, we moved to Florida where Marc was to begin a university job in September. Before we moved, I purchased a temporary health insurance plan, since my insurance expired when I left my job. I would stay home with Rowan (who was quickly approaching 1) and feel out the area before returning to work. Rowan’s allergies were resolved and she’d almost outgrown the acid reflux, but she was still not happy. I spent my days looking at and playing with my beautiful baby. She still didn’t sleep through the night, but our days were much better.

We were not completely unpacked when I began to notice Rowan’s left eye looked more green than her right blue eye. Marc couldn’t see the difference and told me to calm down, but I couldn’t let it go. I asked my babyfit.com support network if anyone’s baby had eyes changing color at different rates. Many moms responded that some people have different eye colors, but there were no real answers. One mom, Madeline, asked if I could post a photo. I dug our camera out of a box and took a photo of Rowan inside the house. I did not usually use a flash, but our new home had less natural light than our previous house. 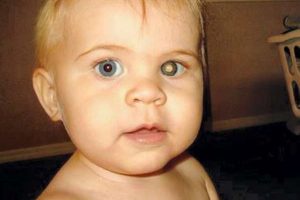 diately, Madeline sent me a friendly personal message. She noticed Rowan’s left eye was reflecting in some pictures, and was aware this could be serious. She told me not to panic, but suggested I have her checked by an optometrist  She included a web link to retinoblastoma information.

I looked at the website and I knew. I called our temporary insurer and got a few names of doctors we could see. We were able to see one that day, Friday. Marc came with us, but lectured me about not believing everything I read online. The pediatrician flicked off the lights and used a ophthalmoscope to look into Rowan’s eyes. She told us she saw something but couldn’t say what. She wanted us to see an ophthalmologist right away. We drove 45 minutes to see a specialist who was technically closed, but waiting on us to arrive.

The specialist dilated Rowan’s eyes. She was a wreck by then and didn’t know what was happening. I was hysterical and Marc still hoped this was not cancer. The specialist told us he thought it was retinoblastoma and he could not see her optic nerve. He ordered MRI and CT scans to be performed that day under anesthesia.

Unfortunately, Rowan had eaten, so we had to wait four hours at the children’s hospital. During that wait, Rowan took her first unassisted steps. Her MRI and CT scan went well. The ophthalmologist looked at her under anesthesia and reviewed the scans. He wouldn’t say it was definitely retinoblastoma, but was fairly convinced. He was able to see her optic nerve, but the tumor was very close to it. He sent us to a retinoblastoma specialist in Miami for evaluation. We were to be there Monday morning at 7am.

We were heartbroken. I emailed Maddie to let her know. I couldn’t thank her enough. Really, I knew something wasn’t right, but I wouldn’t have guessed cancer.

“It just kind of sucks right now and I am completely freaked out, upset that it is the weekend and there is nothing to be done until Monday. I also wish Rowan would sleep in our bed with us, but she won’t and she won’t sleep with us on her floor either.”

We drove to Miami on Sunday night and none of us slept. At his officer, Dr. Murray briefly looked at Rowan and scheduled an exam under anesthesia for the following day. He confirmed retinoblastoma. They discussed the EUA schedule and chemotherapy (6 cycles, reassessing after cycle 4 to determine whether the eye needed to be removed), but to me they sounded like Charlie Brown’s teacher. I took extensive notes that, when I looked back, made no sense.

Dr. Murray lasered her tumor during the EUA. He wanted her to have a port-a-cath inserted into her chest, but the hospital had to postpone surgery and chemotherapy for a week due to no doctor availability. So we returned home, heartbroken, in shock.

Tropical Storm Fay delayed Rowan’s surgery again until her first birthday. We left the hotel at 5.30 to be at the hospital by 6. After a long morning, her port was accessed for fluids around 1pm, and her first cycle of chemotherapy finally began at 11.30pm. I almost fainted when they hooked up her first bag. Its hard to describe how emotional I was. Five years later, I still cry thinking of it.

After two days of chemo (vincristine, etoposide and carboplatin and a 30 hour infusion of cyclosporin), we returned home. Rowan did pretty well with the chemo, but two days later, she spiked a fever and we were admitted to a local hospital. While there, Madeline wrote to tell me she’d contacted her local paper to raise awareness of Retinoblastoma through a fundraiser she planned for Rowan, The reporter wanted to be in touch with me. Of course I said yes – we needed the help since my Marc had not started his job yet and our expenses were mounting, not to mention the medical bills, which our temporary insurance company was fighting.

Things snowballed immediately. I was contacted by reporters, the BBC, the Today show, CBS News and Inside Edition. Our story became an international sensation. We wanted to spread awareness, we needed help, and we were overwhelmed by it all.

Not every reporter got it right, but close enough to make parents, grandparents, aunts, uncles and friends aware. At least three children were diagnosed thanks to Rowan’s story being widely reported.

Today, Rowan is very much like any other child. She loves to run, play, paint, draw, ride her bike and swim. She tells everyone about her “fake eye” in a matter of fact voice (more like a “duh, I do have a fake eye!” while she is poking it). We are nine years post enucleation, and Rowan’s last exam under anesthesia was five years ago. She is a very strong, independent young lady and I think much of that is because of this cancer journey she travelled as a baby.