The most common early sign of retinoblastoma is a white glow in the eye, seen in flash photos when red-eye reduction has not been used.

When the cancer is more advanced, a white eye glow can be seen in dim light with the naked eye. 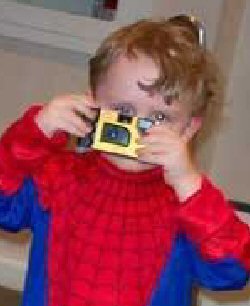 Eyes naturally reflect a tiny white dot from the cornea, the clear outer casing of the eye that covers the pupil and iris. The pin-point reflection should be symmetrical, just to the nasal side of of the central cornea.

Many nocturnal animals have a reflective layer behind the retina called the tapetum lucidum.  This acts as a mirror, reflecting light so it can be reabsorbed by the cone cells of the retina, creating clearer night vision.   This is why a cat’s pupil looks white when it is caught in bright light.

When retinoblastoma develops, it acts like the cat’s tapetum lucidum. Light reflects off the cancer’s white surface, causing the pupil to appear white. Hence the term “cat’s-eye reflex” to describe white pupil.

The medical term for this white eye reflex is “leukocoria”.  When caught in photographs or video, this reflex is called “photoleukocoria”.

Other Causes of Leukocoria

Leukocoria is not necessarily a sign of retinoblastoma.  Several other eye conditions can cause white pupil, such as Coat’s Disease, cataract, severe refractive error and ocular albinism. The white glow may also be a harmless reflection from the optic disc.

The retina, at the point of the optic disc (end of the optic nerve), contains no rod or cone cells, so it cannot process light.  When a camera flash hits the optic disc directly, light is reflected back, causing the pupil to appear white even though the eye is healthy. As smartphones frequently capture pseudoleukocoria, they are not the best tool for monthly fundal reflex screening photos.

This harmless reflection most often occurs when the child’s eye is turned about 15° towards the nose.  However, pseudoleukocoria can only be confirmed by an ophthalmologist (eye doctor) through a fundal reflex (“red reflex”) eye exam.  Learn about what to expect at the eye exam.