You are here: Home / UK / Our History

World Eye Cancer Hope was inspired by two brave girls from opposite ends of the world. 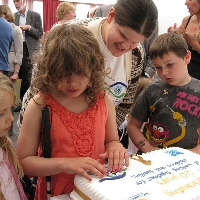 On September 29, 2004, Abby White, a retinoblastoma survivor and friend of Daisy’s family, received an email from a mother in Botswana (southern Africa) whose two-year-old daughter had the same cancer.  By coincidence, September 29th is also the Feast of St Michael, Patron Saint of Sick Children, often celebrated with wreathes of Michaelmas Daisies.

Beyond One Child, WE C Hope for All

In November 2006, Brenda and Abby flew to Kenya to explore how the organization might begin to answer Rati’s Challenge. This visit led to the launch of the Kenyan National Retinoblastoma Strategy, a model for effective care of children with eye cancer in developing countries.

Inspired by Rati’s teaching, Daisy’s gift, and the needless suffering both girls endured, we aspire to bring the promise of life and sight to every child with eye cancer. In September 2015, we rebranded to become World Eye Cancer Hope.

Daisy and Rati never met. Yet the twining of their lives created a beautiful planting of seeds that are now blooming into hope for thousands of children, families and adult survivors worldwide.