You are here: Home1 / Hope2 / We Mourn the Loss of Dr. Barrett Haik, a Great Rb Physician.

We Mourn the Loss of Dr. Barrett Haik, a Great Rb Physician.

The retinoblastoma world lost a dedicated physician and friend on Friday, July 22nd.  Dr Barrett Haik was a highly skilled ophthalmic surgeon, researcher, educator, mentor and fundraiser who cared deeply for the children, adults and families he treated.  He led development of the ophthalmic oncology service at St. Jude Children’s Research Hospital, and supported international outreach that has improved the lives of thousands of children with retinoblastoma across the USA and around the world.

The following obituary is published with permission from St Jude Children’s Research Hospital.  We extend our sympathy to the faculty and extended family of St Jude at this very sad time.

Barrett George Haik, MD, FACS, passed away unexpectedly but peacefully in his sleep at his boat house in New Orleans, Louisiana, on Friday, July 22, 2016.

Dr. Haik was born in New Orleans on September 8, 1951, the son of George M. Haik, MD, and Isabelle Saloom Haik. He graduated from Metairie Park Country Day High School and Centenary College, where he earned a Bachelor of Science in Biology. Dr Haik earned his medical degree and his PhD in Anatomy from the Louisiana State University Medical School. 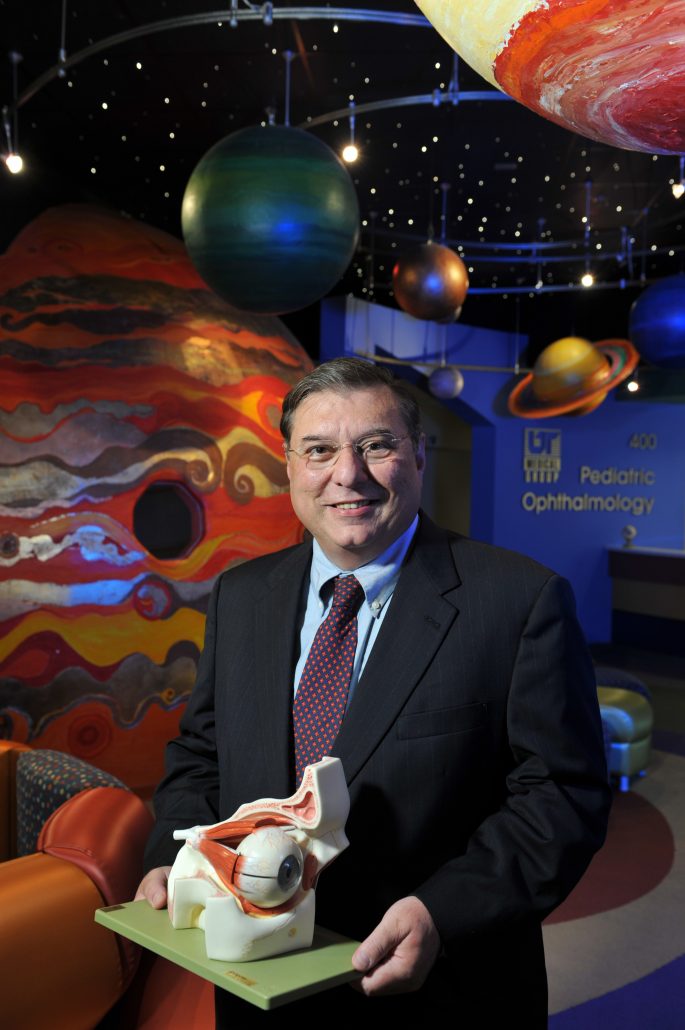 In 1986, he joined Tulane University in New Orleans as a professor of Ophthalmology. He was also made program director and medical director of the Eye, Ear, Nose and Throat Hospital, where he trained residents from Tulane, LSU and the Ochsner Foundation.

In 1995, Dr. Haik was recruited to be Chairman of the University of Tennessee Health Science Center Department of Ophthalmology. Through his remarkable leadership, Dr. Haik transformed the Department of Ophthalmology from a small office with four academic faculty members into the acclaimed Hamilton Eye Institute, a world-class eye center that is home to more than 40 academic faculty members and lauded among the top ten eye programs in the United States.

In addition to founding HEI, he also built the ophthalmic oncology service at St. Jude Children’s Research Hospital, saving the lives of children with ophthalmic tumors. Dr. Haik made tremendous strides in the fight against retinoblastoma, a pediatric eye cancer that once took the lives of 90% of children in developing nations who were afflicted with it. Through Dr. Haik’s international outreach initiatives to establish centers of excellence throughout the developing world, that mortality rate is now under 10% in many countries.

Dr. Haik served in high offices, boards and committees for more than 60 organizations and professional medical societies, influencing the teaching and practice of ophthalmology on a national level.  He served 3 years on the board of the Tennessee Health Services and Development Agency, to which he was appointed by Governor Bill Haslam.

An accomplished and enlightening educator, Dr. Haik gave more than 370 scientific presentations in both national and international forums. Haik authored or co-authored more than 160 peer-reviewed journal articles, 55 book chapters and 4 books, and served as editor or reviewer for 17 publications.

He was internationally renowned as an expert in the diagnosis and management of ophthalmic tumors and received numerous grants for his research. He also had great success in recruiting basic scientists of national repute to the Hamilton Eye Institute, and worked diligently with the UTHSC Development Office to identify, develop, and recruit donors supportive of the Hamilton Eye Institute’s mission.

He was a dedicated teacher and mentor, researcher, skilled surgeon, and highly experienced and proven cultivator and steward of philanthropy. He established relationships with dozens of individuals, organizations and foundations that provided significant ongoing financial support to the institute and university. He received a Healthcare Heroes Lifetime Achievement Award from the Memphis Business Journal and a Life Achievement Honor Award from the American Academy of Ophthalmology.

Dr. Haik’s true passion was helping people. Semi-annually he traveled to Panama to operate field clinics to help the poorest of poor. He felt that identifying retinoblastoma in children was paramount to saving their lives. He lectured around the world and traveled to the Middle East, Asia, and South America to teach physicians how to identify and treat pediatric ocular cancers. Dr. Haik served on the Board of the Eye Foundation of America, founded by his father and based in New Orleans.

When not caring for patients or teaching others, Dr. Haik enjoyed the company of his friends and spent his spare time golfing, fishing in Venice or enjoying time with his bloodhound Maddie, who died just a few months ago.

He is preceded in death by his parents, Dr. George M. Haik, Sr., and Isabelle Saloom Haik. He is survived by son Christopher Barrett Haik (Sofia) and daughter Claire Marie Haik (James Anthony Schakleford). He is also survived by brother Dr. George M. Haik, Jr.; brother Dr. Kenneth Haik (Diana); and sister Suzanne Terrell (Lee); his close companion Blanca Phillips, her family as well as many other loving members of his extended family. He will be missed by his many patients, colleagues, students and friends throughout the world.

Services will be held at Lake Lawn Metairie Funeral Home on Wednesday, July 27, with a visitation at 12 p.m. and service at 3 p.m. An event honoring and celebrating his life and accomplishments is also planned in Memphis, Tennessee, at a date and location to be determined.