Thousands of people travel to Mombasa each year to live their tropical paradise dream of palm fringed beaches and coral seas.  For three days in September, this beautiful ancient city welcomed a group of dedicated visionaries making dreams happen for children with eye cancer and their families.

We were honoured to be joined this year by Mr. Samson Ndegwa, Chair of Lions Loresho Eye Hospital in Nairobi.  As Guest of Honour, he gave a resounding endorsement of our work, praising our unique collaborative approach to retinoblastoma that places the child and family at the centre of all we do.

A key focus of this year’s meeting was continued development of the Kenya National Guidelines for Retinoblastoma Care.  Groups were formed during the 2009 meeting to work on specific chapters covering public awareness and education, screening, features and classification of Rb centres, referral and diagnosis, genetics, treatment, follow up and psychosocial support.

Recommendations were further developed this year through intensive group sessions and discussion among the full delegation.  Intense debate led to agreement on a number of contentious topics such as the use of orbital exenteration (radical surgery to remove all orbital bones and tissues) in children with orbital extension of retinoblastoma,  After much discussions, doctors reached consensus that exenteration is an unhelpful and traumatic surgery to be avoided at all costs.

Collaborative development of evidence based clinical care guidelines is a slow process, requiring thorough literature searches and much group discussion until published evidence is identified or consensus reached to support each recommendation.  The resulting guidelines provide a solid foundation for national standards of care, ensuring children receive the best possible chance of cure or quality of life when cure is not possible.

Canada is currently the only country to have published Guidelines for Retinoblastoma.  By the end of this meeting. The Kenyan National Retinoblastoma Strategy Group had fully agreed and voted to adopt six of the eight National Guidelines chapters.  Further work over the coming year will hopefully lead to adoption of the remaining chapters next year, paving the way for national publication and integration of the complete document.

Prof. Brenda Gallie and Dr. Helen Chan led presentations and discussions on current retinoblastoma treatment and challenges.  Subjects included the importance of early eye removal and specialist pathology reports for severely affected eyes, and use of chemotherapy for children whose cancer has spread beyond their eye.

Several interactive sessions demonstrated eCancerCareRB and RbCoLab technology, both of which support telemedicine and vital research.

The eCancerCareRB database documents patient records on an easy-to-navigate timeline.  Housed on a secure server, Information can be recorded and accessed by all members of the child’s medical care team, regardless of their location, supporting shared-care.  Anonymised data can also be gathered from all patient records to support research that informs further development of patient and family centred care.

At the Retinoblastoma Collaborative Laboratory (RbCoLab) in Nairobi, pathology slides can be scanned and viewed on a computer in ultrahigh resolution.  Once scanned, images can be uploaded to the internet for collaborative review and discussion to ensure each child received the best possible post-operative care.

Several breakout sessions enabled the KNRbS task forces to evaluate their achievements and challenges during the past year, and set goals and tasks for the coming twelve months.  The awareness, family support medical care and resource mobilisation task forces presented their work and 2011/2012 plans to the entire delegation for further discussion.  A great deal of positive progress was made, and we look forward to telling you more about it in the coming months.

On the final day, delegates were able to attend two workshops from a choice of four.  The well attended sessions focused on enucleation technique, child life practices, retinoblastoma genetics and grant fundraising.

This year we welcomed several international visitors to our meeting.  Hannatu Adamu Yarang is lead ophthalmic nurse at ECWA Eye Hospital in Kano, Nigeria, which cares for many children with retinoblastoma each year. She was joined by Mary Paulson, a missionary children’s worker originally from Spokane, Washington, who provides play and emotional support to children at EWCA.  Mary was particularly delighted to attend the child life workshop and learn from Morgan and Kenya’s child life leaders.

Sheri Holman, mother of a retinoblastoma survivor from New York City, reported on preliminary meetings ahead of the UN Summit on Non-Communicable Diseases (NCDs). This Heads-of-State summit was held 19-20 September during the annual General Assembly in New York. 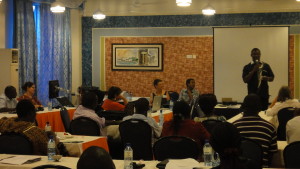 At preliminary hearings held throughout the summer, the UN stressed that no new NCD funding would be created.  Instead, urge existing organizations and clinics to deliver awareness, stigma-busting and early detection programs, medical training, and better access to existing off-patent drugs.  They have challenged the global media to stress the urgent need to address this situation.

Working together with local medical professionals, government and community leaders, our low budget Kenyan program is a shining example of what the UN seeks to achieve through existing initiatives.

Up Front Down Under
Scroll to top
Translate »