The following is part of an Editorial from the British Journal of Ophthalmology, written by our team members Helen Dimaras (Global Health Researcher), Elizabeth Dimba (Rb pathologist), and Brenda Gallie (Medical Director).

Imagine two children with unilateral retinoblastoma. One lives in North America, while the other, in sub-Saharan Africa.

In North America, a mother notices a funny white-eye reflex in photographs of her child. It is consistently present in various photos taken over the last month. Curious, she surfs the Internet and discovers that a white-eye reflex could be a sign of cancer. Mother and child visit their family doctor, who confirms the mother’s worst fear: it’s retinoblastoma. Two days later, the affected eye is removed at the local children’s hospital. The next week, histopathology results confirm no risk of tumor spread, while a few weeks later, genetic testing of the tumor and blood indicate the RB1 mutation was sporadic. The child is fitted with a prosthetic eye and goes on to lead a normal, productive life.

In Africa, a mother notices a white reflection in her child’s eye, most prominent at dusk. Not sure what to make of it, she is distracted by the numerous demands placed on her, as she struggles to provide for her six children. Still, she consults with the traditional healer in the next village. He gives her an herbal ointment for the child, and instructs her to apply it twice daily. The eye gets worse, and when it starts to protrude from the socket, the mother takes the baby to the city hospital. She walks nearly an entire day to get there, carrying the child on her back. The doctors tell her the eye must come out; it is cancer of the eye. When the eye is removed, mother and child return to the village, thinking the worst is behind them. A year later, the socket appears red and swollen. Back at the city hospital, a doctor tells her the cancer has recurred. He attempts to track down the pathology report from the enucleation a year before. When he finally locates it, he realizes that it only indicates “retinoblastoma”. Treatment options for the child are limited; the child eventually dies from systemic spread of the disease.

Two children. The same affliction. Drastically different outcomes. Yet each story represents the most common reality for children with retinoblastoma in these respective parts of the world. This difference becomes even more prominent when one considers that the majority of children with retinoblastoma live in less-economically developed countries (LDCs), where any hope for survival is minimal.

Solving the world’s development problems is beyond our scope and breadth of expertise, but global collaboration is key to solving the retinoblastoma survival inequity.  An open dialogue between DCs and LDCs, with an aim of not only achieving best care, but also best research practices, can build upon evidence-based care. 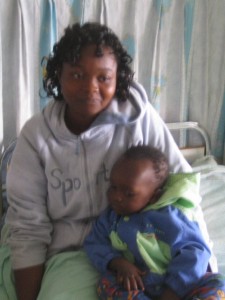 No family can face cancer alone – they need our help today!

Clinician and researchers in DCs and LDCs working together in a manner that is mutually beneficial will ensure everyone learns and progresses. For example, the identification of children at risk of tumor spread by timely and accurate histopathology analysis can be the single most important determining factor leading to survival rather than death. Accurate pathology does not require expensive machines or new discoveries, but rather good communication between the caregivers, an achievable goal for both DCs and LDCs.

In time, we will cease to think of the difference between DCs and LDCs, but instead approach children and families affected by retinoblastoma as one group that deserves highest quality care and best outcome, which the global retinoblastoma community can together define based on the evidence from their collaborative efforts.

Find out more about how we are changing and saving lives.

A Special Vision About Special Eyes