You are here: Home1 / Awareness2 / Why Refuse Eye Removal Surgery?

People often ask incredulously “why do parents refuse eye removal surgery if it’s the only way to save their child’s life?”  This is a very important question.  Understanding the complex answers helps us care for families to ensure children have the best chance of cure.

Before we talk about why parents refuse eye removal, it is important to understand why this surgery is necessary for so many children.

Retinoblastoma extending beyond the eye spreads rapidly to the bone marrow or brain, and even the most aggressive treatments offer slim chance of cure.  Removing an eye while the cancer is fully contained within is the best way to save a child’s life.

Eye removal surgery is the internationally recognised standard treatment for children with large tumours (group D or E) in only one eye.  Removing the eye is far less traumatic than prolonged treatments that have slim chance of cure, damaging cosmetic effects and high risk of allowing the cancer to spread.

Doctors try to save some vision when both eyes are affected, but removing both eyes is sometimes essential to protect the child’s life.

In Africa, Makena was just two years old when cancer was found in her left eye.  Told of the diagnosis during a 10 minute consultation, her parents were instructed to attend the city hospital as the eye must be removed.  Shell-shocked and confused, with no information and no money to pay for treatment in the city, they opted to see a traditional healer instead.  Only when the eye began swell did they travel to the specialist, but treatment came too late to save Makena’s life.

In North America, Peter was also diagnosed with cancer in his left eye aged two years.  Advised to remove the eye, his shocked parents researched retinoblastoma online.  They discovered the eye might be saved with a combination of chemotherapy, laser and/or cryotherapy.  Determined to give their son that opportunity, the family begin treatment at another hospital.

Peter had six months of chemotherapy and five weeks of radiotherapy, but his eye was eventually removed a year after diagnosis.  Microscopic cancer cells were found in the eye’s coating, and more chemotherapy followed.  A year later, Peter began having leg pains and an x-ray revealed the cancer had spread.  More chemotherapy and a bone marrow transplant eventually saved his life.

Makena and Peter had very different experiences, but the reasons for their parents’ refusal of surgery were fundamentally the same.  Lack of information about eye removal and the risks of not removing the eye, and lack of retinoblastoma specific family support prevented both families from making fully informed decisions.

The desire to save their child’s eye lay at the heart of both families decision.  Eyes are the “window to our soul”.  Worldwide, public perception of physical difference and lack of understanding about retinoblastoma leads to harmful – even fatal – stigma.  This is compounded by lack of access to artificial eyes in many countries.

Most families face the weight of personal loss and public scrutiny alone, rarely meeting other affected children.  “that surgery is barbaric”; “you should have done more to save the eye”; “anything with one eye should be shot” are just some of the comments said to parents whose child’s eye was removed.  In some cultures, a person with only one eye is believed cursed.  In societies where eye removal has historically been a criminal punishment, stigma associated with the surgery is huge.

Refusal of surgery is a major barrier to survival, so how can it be overcome?

Early diagnosis is a hollow victory when stigma prevents appropriate early treatment. Awareness campaigns must embrace not only early signs of retinoblastoma, but also the urgency of early eye-removal surgery.  Highlighting children’s ability to live successfully even after the loss of one or both eyes is essential.

Parents need compassionate understanding and clear explanations of cancer, its progression, the surgery and rehabilitation, so they can make informed treatment decisions.  They also need opportunities to meet other families who have been through the experience, and to share their story without guilt, shame or fear.

No child should die when they could be cured by eye removal surgery alone.  We provide information and support to help families worldwide accept this radical but vital life-saving treatment, to ensure their children can grow up happy and healthy. 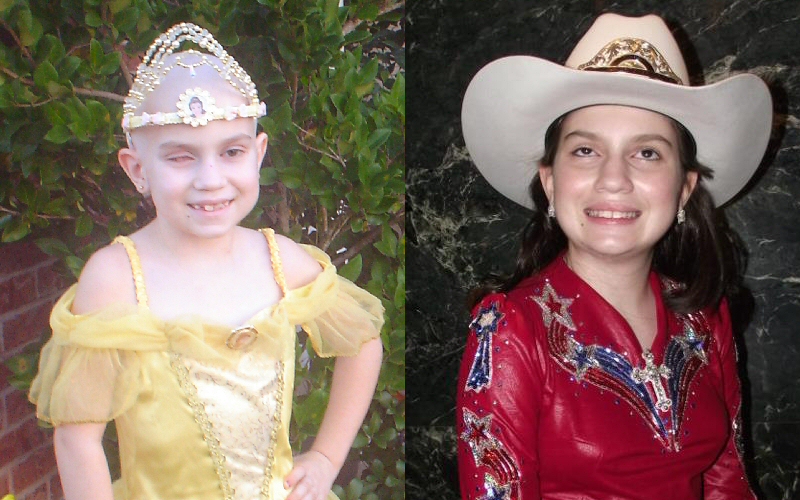 Tacey was the belle of the ball, even after her second eye was removed. Her artificial eyes are works of art fit for a Rodeo Princess.