Marissa Gonzalez, WE C Hope USA board member, reflects on the first Family Day at Children’s Hospital LA, where she received treatment for bilateral retinoblastoma.

A Wonderful Experience for Families and Survivors

On Saturday, June 10 I was asked to speak on a panel for the first ever Children’s Hospital Los Angeles (CHLA) RB Family Day. I was excited to bring the perspective of an RB survivor to the panel, which included Dr. Jonathan Kim, Dr. Rima Jubran, ocularist Stephen Haddad, along with other RB specialists. I knew it would be a fun, albeit emotionally challenging day – but what the next three hours brought was an incredibly inspiring afternoon that I am so thankful to have been part of.

The event was organized by Amber Shearer, clinical social worker at CHLA, and Elva Tamashiro of the Institute for Families, along with many other hospital staff members.

The moment you entered the event you no longer knew you were in a hospital, something I know the families and children were thankful for. Balloons and photo ops with therapy dogs greeted us upon arrival, and the huge display of toys that each child could choose from was a big hit.

A lunch display complete with an ice cream sundae station kept everyone fed, while more therapy dogs, sporting their own memorabilia baseball cards, were on hand for a friendly hug. 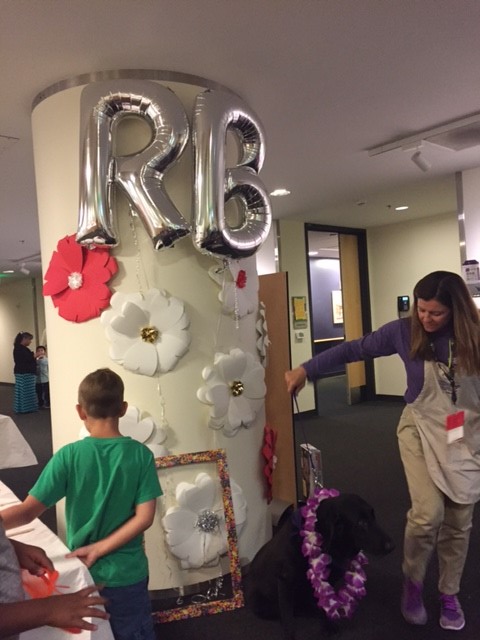 In the second room were tables and representatives from organizations such as Ocular Prosthetics, The Braille Institute and the Institute for Families who handed out information and answered questions. Spanish language translation devices were available and an interpreter made sure Spanish-speaking families didn’t miss anything. A play area with games and toys provided entertainment for the kids during the panel session and Q&A.

Led by Dr. Kim and Dr. Jubran, the panel was an opportunity for parents to ask questions of any of the specialists. Topics included: genetics, second cancers, dietary inquires, bullying, psycho social issues, adapting in school and many others. I was impressed by the level of knowledge and questioning asked. We had to end the panel after about 90 minutes, but there were enough questions to go on all day!

By far the most rewarding part of the day was interacting with the families and meeting the patients. Many of the kids were under age 6 and most still going through active treatment, or just out of it. Seeing the kids running around playing was great.  They didn’t necessarily know they were playing with another child who had their same cancer, they were just being kids.

Many parents wanted to take photos of me with their little one.  This surprised me at first, but for most of them, meeting an adult who survived Rb and is doing well was a first-time experience. Many of these parents are just trying to make it through the next chemo cycle or EUA.  So meeting someone who is on the other side of that was a reminder that there is an end in sight, even if that end seems an eternity away.

I met so many cute little ones. Raylan, who I had known on Facebook and through a friend at the LA Ronald McDonald House but had never met. Adorable Elise and her parents who came in from Arizona for the event. Allison and her family, Ricky and his mom, Jenavieve and her parents, the Rosenmeyer family and the list continues.

Little Max, a five-year-old who has a quarter of his vision left in only one eye, was a mini force of nature running around the room with and without his white cane, cute as could be. 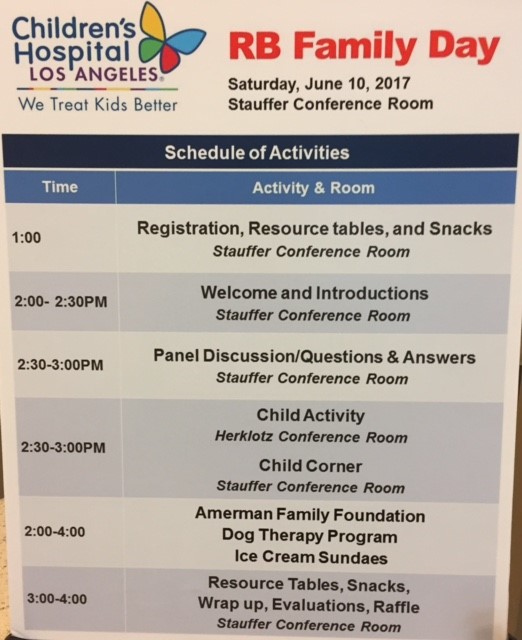 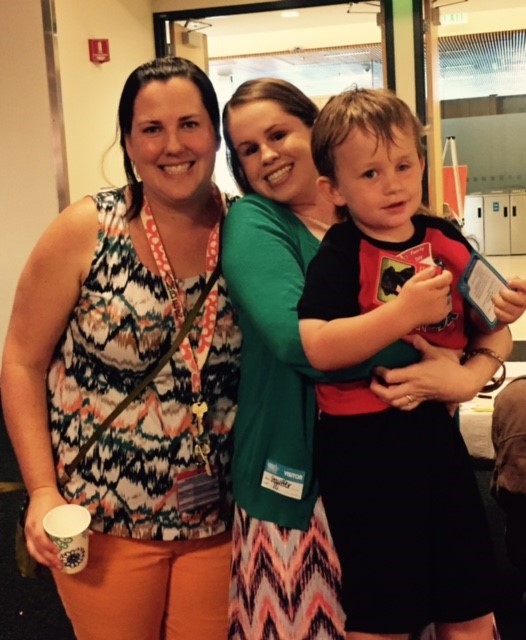 Clinical social worker, Amber Shearer, helped organize the day. She is pictured with Raylan, who receives care at CHLA.

Kimberly, an 18-year-old recent high school graduate, and I hit it off quickly. She had a million questions about life now that she was out of high school, navigating reconstructive surgeries, driving, and general life as a newly minted “adult” Rb survivor. I related to her on so many levels, and with each of her stories I kept thinking, “I went through that exact same thing.”

We especially connected on the topic of reconstructive surgery, as Kimberly is due for another eyelid surgery by Dr. Kim in just two weeks. She expressed how the improved shape of her eyelid and face with the previous surgeries had impacted her life, and I told her I knew exactly what she meant.

She asked for advice on how to tell Dr. Kim how much her reconstructions have impacted her confidence and her life. Although he was standing a few yards away, I suggested she write him a thank you card so she can properly articulate her feelings without having to worry about crying or getting nervous. 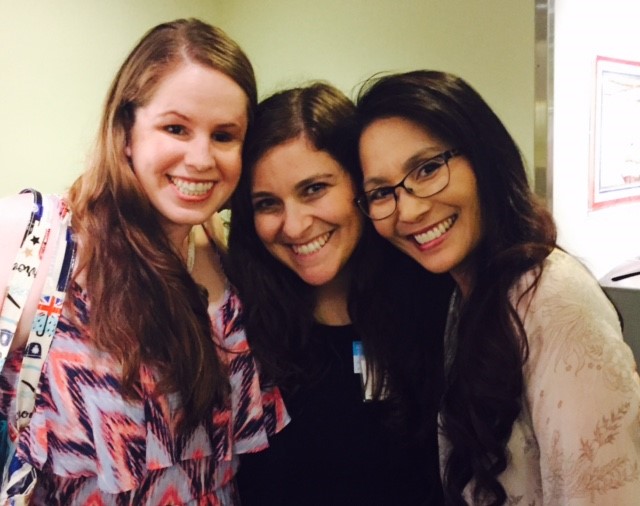 Marissa is pictured with Elva Tamashiro of the Institute for Families, who helped organize the day, and ocularist Sarah Haddad, who works alongside her father, Stephen Haddad. 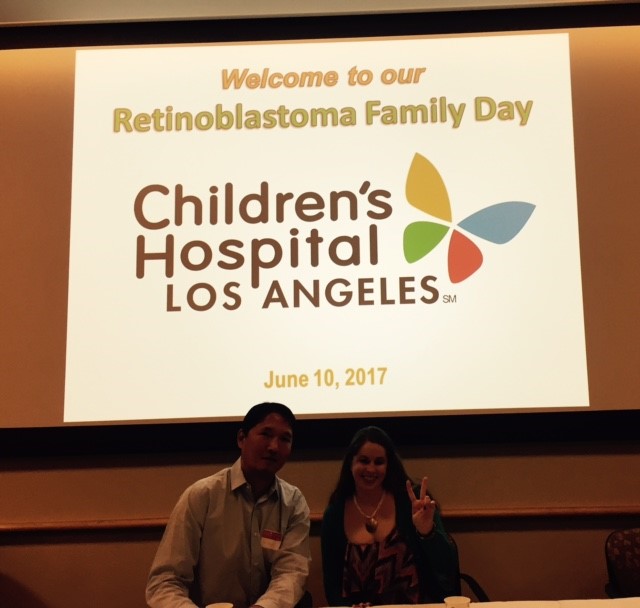 Marissa and Dr. Kim, Director of the CHLA Retinoblastoma Program.

My mother and I left the event feeling so inspired by all these amazing families and the little ones fighting their brave fight. It’s amazing how resilient children are. The comradery forged between families was truly amazing.

I had nothing like this when I was undergoing cancer treatments. I didn’t even meet another Rb survivor until I was in my late 20’s. My mom had no other parent to turn to for advice or support whose child was also diagnosed with Rb; no one to tell her what to expect when her baby’s eye was removed or when her child didn’t tolerate anesthesia well.

The impact this family day had on all involved was simply wonderful. The event was organized with love and compassion, and executed beautifully.