You are here: Home1 / Hope2 / The Anatomy of Retinoblastoma Pathology

The Anatomy of Retinoblastoma Pathology

Retinoblastoma is a highly curable cancer, but it is also very aggressive.  Without early diagnosis and appropriate treatment, cancer cells can escape the eye, invading orbital tissues, travelling along the optic nerve to the brain, or through the bloodstream to bone marrow.

When a child’s eye is surgically removed because of retinoblastoma, expert pathology is vital to guide post-operative care.  A pathologist carefully examines the eye under a microscope to look for signs of cancer, focusing on specific parts known to be high risk for spread. Doctors use the pathology report to decide if more therapy is needed. 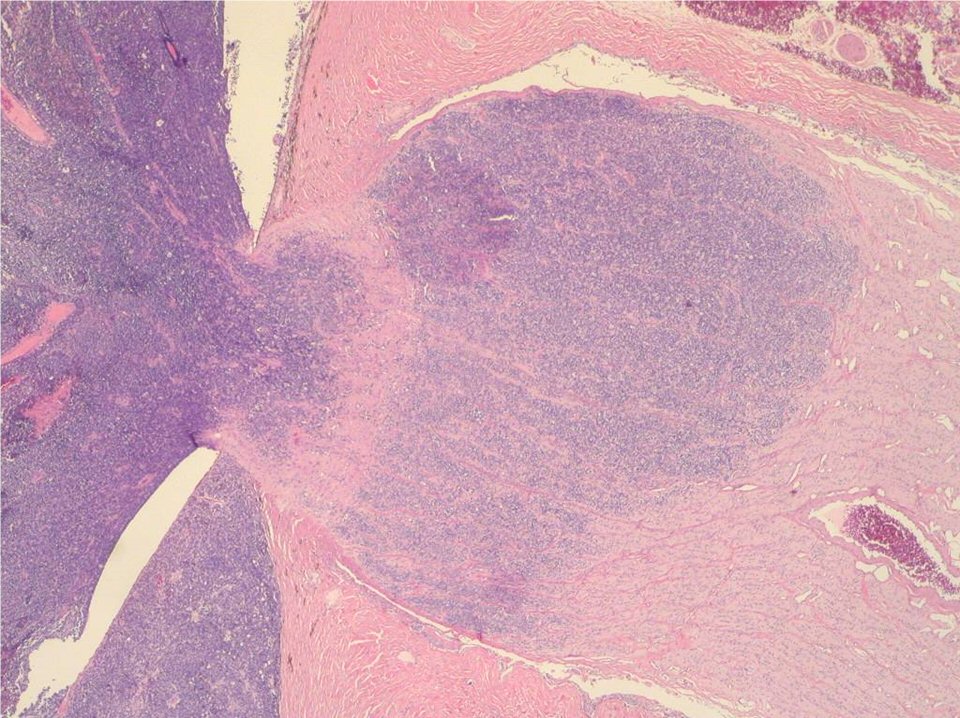 This pathology slide shows the tumor inside the eye on the left, invading into the optic nerve.  This is the most dangerous event that leads to extension into the brain, and often death.

In particular, the pathologist and doctors want to know if cancer has spread to:

The pathologist’s findings are usually sent to the child’s doctors within two weeks of surgery.  The ophthalmologist will explain results with parents at this time, and discuss whether any further treatment is needed.

When No Pathology Report Is Available

Caring for a child without a pathology report, after enucleation for retinoblastoma, is like travelling unfamiliar territory in the dark, without a map.  The journey becomes chaotic and fraught with worry, and the chance of reaching your destination is reduced.

Linda was 27 months old when doctors diagnosed cancer and told her distraught parents she would die without immediate surgery to remove her eye.  Just one pathologist served the entire hospital in western Kenya where Linda received care, and a report was never provided to her doctors.  Cancer had filled her eye and her doctors were not willing to risk under-treating her, as they lacked the tools to treat an aggressive relapse.  So Linda began weekly chemotherapy to kill off any potential unseen tumour cells before they had chance to grow.

Linda’s chemotherapy drugs, antibiotics and nutritional supplements were provided by various local organizations.  Despite this, the burdens on her family were great.  Her siblings were removed from school to save money needed for travel, hospital admission, hotel accommodation and extra cleaning products to protect Linda from infection.  Often, funds were unavailable and Linda missed her treatments as her family were pushed deeper into poverty.

Close to the end of therapy, Linda contracted malaria.  Weakened by therapy, she was unable to fight the infection and, despite prompt treatment, she died.

It’s possible Linda never needed chemotherapy, but her doctors couldn’t leave her exposed to risk, knowing they would be incapable of treating a relapse.

Like Linda, Rati’s doctors did not receive a pathology report after her eye was removed.  However, unlike Linda, she did not receive prophylactic chemotherapy.  She was discharged after just one follow up eye exam.  19 months later, cancer relapsed in her eye socket.  Despite a heroic international effort to save her life, she died two years later, aged 4.

How different might life have been for Linda, Rati and their families with good pathology?

Eliminating the Need for Further Treatment

A detailed pathology report helps doctors identify whether a child does or does not need chemotherapy.  If the child has cancer in only one eye and the cancer has not spread, no further treatment is needed.

Connor’s experience shows how the pathology report aids interpretation of imaging scans where, alone, the scan could be misinterpreted.

Connor’s eye was swollen to the size of a golf ball when he was diagnosed, and an MRI indicated that cancer had invaded his optic nerve.  Fearing the worst, doctors prepared his family to begin chemotherapy after removal of his eye.  However, cross-section analysis of Connor’s removed eye and optic nerve showed the cancer had not invaded the nerve.

Several days after surgery, pathology confirmed Connor’s large tumour had compressed the optic nerve. The blood vessel feeding his eye, which runs through the nerve, was blocked under that pressure, and clotted at the base of the nerve.  This clot had been seen on MRI as potential cancer invasion.  Without a blood supply, the tumour died, and Connor’s eye swelled up as his body reacted to the dead tissue.  He was a very lucky boy.

If cancer has spread to outer layers of the eye or to the optic nerve, more treatment is needed to save the child’s life.

Soon after Ewan’s second birthday, his mother and grandmother began to notice changes to the appearance of his eye.  A long seven week wait to see an ophthalmologist delayed his diagnosis of unilateral retinoblastoma.  When his right eye was removed, pathology showed the cancer had already spread into the outer layers of his eye.  He received six cycles of chemotherapy to ensure any tiny rogue cancer cells were killed before they threatened his life.

When appropriate therapy is given, and the child receives all prescribed therapy with close follow up, the chance of cure is very high.  However, doctors continue to debate the indications for adjuvant chemotherapy.

The choroid is the second outermost layer of the eye, containing ocular blood vessels that present opportunity for cancer to spread through the bloodstream.   Many doctors recommend chemotherapy when invasion of the choroid is greater than 3mm in dimension.  Others propose treatment for any choroid invasion, and yet others advise that choroid invasion does not warrant chemotherapy.  This creates confusion for parents and may cause under- or over-treatment of children.

Austin was diagnosed with bilateral retinoblastoma aged just 18 months.  Cancer filled both his eyes and they were graded D (right eye) and E (left eye). He began treatment that his parents and doctors hoped would save at least one eye.  After two cycles of systemic chemotherapy and 3 cycles of intra-arterial chemotherapy, the cancer failed to respond, and Austin’s left eye was removed.  Pathological examination of his eye found Post-Lamina Optic Nerve Invasion of 0.02 mm.

Austin’s systemic chemotherapy and intra-arterial chemotherapy were delivered by two different specialist teams.  When the pathology report was returned, his doctors disagreed on the need for adjuvant chemotherapy.  One team did not routinely give systemic chemotherapy for PLONI, while the other did.  The conflicting advice was difficult for Austin’s parents to interpret and navigate, causing much unnecessary distress.

Ultimately, they continued care with their closest team who advised treatment, and Austin received 6 cycles of chemotherapy.  Reasons supporting this decision were the ongoing concern of cancer in his remaining eye, and the aggressive nature of retinoblastoma relapse to the brain, which continues to have a very poor prognosis.

Globally, many children receive chemotherapy before planned removal of their cancer-filled eye.  This is a frequent practice in developing countries, where families might otherwise refuse eye-removal surgery and remove their child from care.  Doctors believe the time spent receiving treatment gives parents opportunity to meet other families in the hospital and come to terms with the need for surgery.  In developed countries, chemotherapy is often given in attempts to save an eye that has remote chance of being saved.

At diagnosis, microscopic cancer cells may already extend to outer layers of the eye or into the optic nerve, or beyond.  When chemotherapy is given before eye removal surgery, cancer cells at key landmarks within the eye may shrink back in response to treatment.  So pathological examination of the removed eye may suggest no further treatment is needed, while tiny cells already floating beyond the eye remain under-treated.

Cancer filled Rowan’s left eye by the time it was diagnosed.  Two weeks after diagnosis, and on her first birthday, she began chemotherapy.  Four months later, after three grueling cycles of treatment, an eye exam under anaesthetic revealed treatment had failed to control the cancer.

Rowan’s eye was removed to protect her life.  However, previous chemotherapy treatment rendered the clean pathology report unreliable, and three more cycles of chemotherapy followed to ensure Rowan’s life was protected.  The second year of her life, an important time of social and physical development, was almost completely consumed by intensive therapy that might have been prevented or reduced by early surgery and pathology to determine her true risk.

This same risk of under-treatment is present with newer treatments that target chemotherapy directly into the eye.  That chemotherapy treats only cancer contained within the eye.  Microscopic cells may be present in the eye’s outer layers or beyond at diagnosis, but they will be left untreated while eye exams suggest an excellent response to treatment.

When Damian was diagnosed with unilateral retinoblastoma, his doctor had high hopes of saving his eye.  He began a course of intra-arterial chemotherapy and appeared to respond well to treatment.  15 months after diagnosis however, tests revealed the cancer had spread beyond Damian’s eye to his brain.  Despite intensive therapy, he died just 14 months later.

Two and a half years earlier, when Damian’s cancer was first diagnosed, he could have been cured by immediately removing his eye and assessing his true risk with pathology.  His passing is a tragedy of epic proportions, but it is not isolated.  Too many curable children like him are forced into an intensive fight for life as critical surgery and pathology are delayed in the effort to save a dangerous eye.

Retinoblastoma Pathology – A Key to Cure

Connor’s anticipated chemotherapy was avoided because pathology helped explain his concerning MRI scan results. Ewan’s life was protected by the pathology report that guided timely post-operative care.  Rowan and Linda received chemotherapy because pathology was either not available or could not be trusted due to previous unnecessary treatment.  Rati died because lack of pathology led to her premature discharge from care. Damian died because his eye was not removed early to enable clear treatment-guiding pathology.

Inconsistent standards of care, limited access to expert pathology and disagreements about indications for treatment interventions cost children and their families dearly.  From avoidable financial pressure and increased poverty to the preventable tragic loss of a child’s life and family break-down, the consequences are far-reaching.

After early diagnosis, accurate, timely pathology may be the most important key to effective care and long-term survival of both the child and their entire family.  As parents, survivors and the medical community who provide care, we all have a shared responsibility to understand and address the challenges and opportunities that will improve cure and quality of life for all children with retinoblastoma.