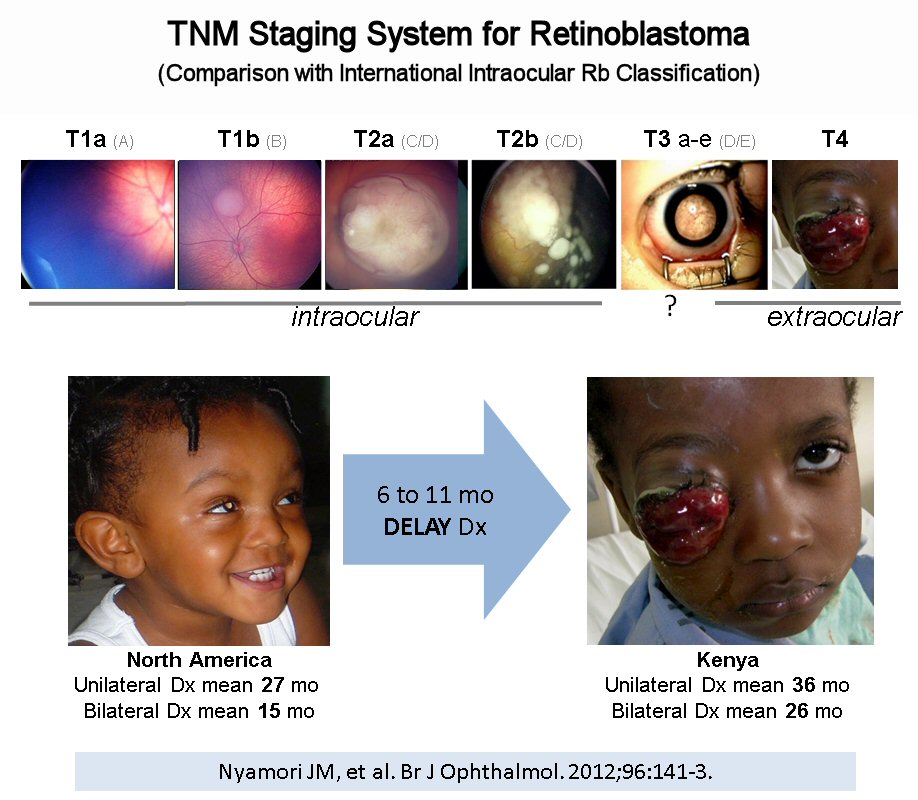 This diagram depicts each stage of TNM Staging System, compared with the International Intraocular Retinoblastoma Classification.  This shows well how cancer progresses within the eye and threatens the child’s life when appropriate treatment is delayed.

Why Do We Stage Cancer?

Doctors and researchers need a simple, memorable tool to quickly and effectively describe the degree of cancer in a child’s eye, and compare impact of different therapies.  An agreed quality classification system facilitates swift second opinions and improves parental ability to make informed treatment decisions.  It also enables effective multicenter clinical trials and evaluation of clinical study results.  A high quality system will be reviewed frequently and revised in response to the changing treatment landscape.

With a simple, clear and consistently used staging system, doctors, patient families and health policymakers can effectively compare and interpret results of published clinical studies.  They can make quality treatment recommendations, decisions and funding plans in the best interests of the child and family.

How is Retinoblastoma Staged?

Various tests are used to diagnose retinoblastoma and find out more about the cancer, such as number, size and position of tumours, and whether cancer has spread outside the eye.

Tests include eye examination under anaesthesia, ultrasound, eye pressure test, and imaging scans such as MRI and CT. While in some places CT must be done because MRI is not available, CT is generally no longer recommended because it uses radiation to collect the image.  Blood tests will be done to check the child’s general health and their body’s ability to tolerate treatments.

If doctors suspect cancer has spread outside the eye, additional tests may be done.  Lumbar puncture removes a small sample of cerebrospinal fluid, (fluid bathing the brain and spinal cord).  This fluid is examined under a microscope to see if any cancerous cells have spread from the eye to the brain.  A bone marrow aspiration or biopsy removes a small sample of marrow, usually from the hip bone.  Marrow is the spongy material inside our bones that makes blood cells.  The sample is examined under a microscope to find out if cancerous cells have spread to the bone marrow.

Retinoblastoma is rare among cancers because it can be diagnosed based on what the doctor observes on clinical exam and imaging tests.  A biopsy (tissue sample) is not needed, and may actually allow tumour cells to spread outside the eye.  The tumor is only safely studied after the eye has been removed.

A blood sample may be taken for genetic analysis of the RB1 gene. Results can take several months, but they help to establish if both eyes, and other blood relatives are at risk.  This specialist genetic test is available at a small number of expert centres around the world, and the ability of each lab to find the RB1 mutations is an important quality control.

Any feature of a higher stage determines the eye stage. This reduces risk of eye loss or life threatening relapse due to under-staging.

What is the Retinoblastoma Staging System?

Several different systems are used to stage retinoblastoma. The three most widely used systems are described below.

The first staging for retinoblastoma was developed in the 1960s by Dr. Algernon Reese and Dr. Robert Ellsworth, who led the first focused center for this cancer, in New York.  Graded 1a to 5b, the Reese-Ellsworth Classification predicted outcome from treatment with external beam radiotherapy, the primary therapy to save vision at that time.  However, many years later, radiotherapy was recognized to have high risk to induce other cancers, so is now only used as a last resort.  So the Reese-Ellsworth Classification not a good predictor of outcome with today’s therapies.

TNM is developed, updated, and monitored for accurate use, by the American Joint Commission on Cancer and the Union for International Cancer Control (AJCC/UICC).  Each type of cancer has unique features to determine TNM staging.

TNMH stages T1a to T3 are for intraocular cancer.  N records presence or absence of cancer in lymph nodes.  M records the presence of distant metastasis.

This system was developed internationally with leadership of Dr. Ashwin Mallipatna, paediatric ophthalmologist.  TNM has been validated through an international survey of 1728 eyes affected by retinoblastoma.  Each eye was staged using TNMH and the older staging systems, according to diagnostic features, and treatment outcome data were assessed.  TNMH was found to better predict outcome for the child’s life and each eye, than any of the older systems.

Thus TNMH stage predicts life and eye outcome when the patient is treated with chemotherapy and laser/cryotherapy, the most widely used primary eye salvage treatments today.

Retinoblastoma is the first cancer to incorporate heritability (TNMH) into the staging system.  This was introduced with Version 8, published in 2016.

Comparison of TNM and IIRC

TNMH for retinoblastoma is new, so we show the equivalent stages for TNMH and the International Intraocular Retinoblastoma Classification.  TNMH has now superseded the IIRC as the most accurate system to indicate disease within each eye, predict life and eye outcome, and determine appropriate treatment.

The following can be used as a guide when comparing TNM and IIRC.

What is the Significance of Seeding in Eye Staging?

Retinoblastoma can escape from the eye into blood, the lymphatic system or cerebro-spinal fluid (fluid bathing the brain).  This is how malignant cancer spreads from its original site into surrounding tissues or reappears in other parts of the body.  The larger the tumor, and the faster it grows, the more likely it is to break apart and allow the cancer to spread.

Seeds are tiny tumour fragments that brake off the larger mass and float into nearby fluids inside the eye. Seeds can float under the retina (“subretinal seeds”) or in the gel filling the eye (“vitreous seeding”). Any seeds are hard to treat, and focal treatments such as laser and cryotherapy cannot be applied to single, invisible cells, until they grow.

Potential to save the eye decreases when seeds are present. However, now, new therapies are available to deliver chemotherapy directly to seeds in the vitreous and under the retina, so we hope for better results to save eyes.

TNMH is considered to be the most accurate eye staging system to predict potential for eye salvage with modern therapies, based on evidence from the International Survey.  TNMH also enables the most meaningful evaluation of results from clinical study of therapies.

Staging and Your Child

When cancer is contained in the eye and treated appropriately, and both eyes receive regular, frequent examinations, risk to the child’s life is minimized.

Understanding and assessing the appropriateness of modern therapies is a vital part of decision making for families and doctors. This is only possible once each eye has been staged using a system designed to predict outcome from such therapies.

Ask your child’s doctor which system is being used, and what your child’s staging means in terms of potential to save sight and risk to life.  To download a complete copy of each staging system described above, visit [update link]

How Do We Achieve Early Diagnosis of Retinoblastoma?